After Steve’s 2nd appointment, we had 3 days before his final appointment. I took this opportunity to plan a fun getaway to the countryside. By this point, we’d been in Bangkok a whole week. Our main objective while in Thailand is to see the country, but to also save money. So as much as I’d like to hop from town to town every few nights, it’s just not financially practical. But, that doesn’t mean weekend jaunts are out of the picture. Scouring through our guide book, Lonely Planet’s Thailand, I decided Lopburi would be the most unique options with our allotted time.

After a very pleasant week-long stay at Old Town Hostel, we put one bag in storage and packed out a weekend bag to catch the train the Lopburi. (Travel tip: The trains have different speeds [ordinary, express, special] & different classes [1st, 2nd, 3rd], equalling different prices. We accidently took an express train, resulting in 3x the expected ticket price. Schedules can be found online, with ‘Ordinary’ trains being the cheapest, express & special being faster, but more expensive.)

Our guide book took us to the most popular haunt in this small country town (pop. 26,500), Noom Guesthouse. We opted for a more affordable fan room, passing on the aircon for this two-night trip to see if we could handle it. (Winter = highs in the low 90s, lows in the mid 70s.) We were in a separate building away from the main area, which was quieter, but closer to the Monkey Zone! Five monkeys greeted us upon arrival to our quarters. (Quite a nuisance to the locals, but quite exciting for tourists like us!)

Our room was very spacious, many windows, & a good fan to circulate air. The shared bathroom had a nice, clean, warm, spacious shower. The WiFi in our building didn’t work while we were there, and rumor was it had hiccups in the primary building. But not a worry. Electrical outlets accepted American cords, as well as Asian adapters. The main building has a nice restaurant offering both Thai & Western food. (Waffles were sure tempting in the morning.) 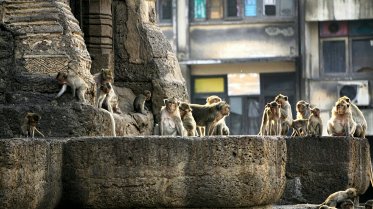 We arrived in the early afternoon, leaving ample time to visit a few of the nearby ruins. Our first stop, of course, was Phra Prang Sam Yot – the monkey temple.  This ruin is in the center of the Monkey Zone, home to over 500 macaques! We joined just a handful of other visitors who all wanted to see what these monkeys were up to. The older monkeys were lounging around the ruins, grooming each other, laying in the sun. Meanwhile, the younger yearlings were quite the curious critters.

Upon entering, I was told to remove my dangly earrings, less to tempt their curiosity. Signs and books state to not have any food or anything resembling food (i.e. plastic bags which means food in their minds) as it will draw the little simians in. Well, it is obvious they think anyone that gets too close to them is worth inspecting. 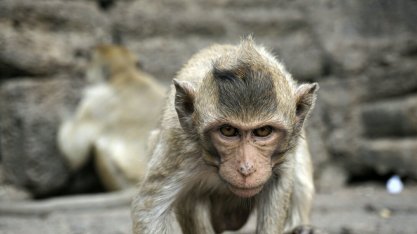 Steve was working on some great photography shots, while I got the GoPro out to capture the playful buggers. Multiple times, we each would have a monkey sneak approach from behind while we were focused on other monkeys. Then, once there’s one, there’s 5. As cute as it may be to have a monkey toddler on your shoulder, they are wild animals. We tried to discourage the jumping and promptly shooed them off when they did get on, though we managed to capture some of the mayhem on camera.

Our full day in Lopburi was actually spent scooting around the surrounding countryside. Our hostel rented motorbikes, which we decided to take advantage of since we were away from chaotic city drivers. A scooter for the day was only ฿300 (<$10) compared to taking the tour, which could be upwards of ฿1200 (~$37) for the two of us.

I used to have a small scooter in my younger days, so I wasn’t too nervous about driving one. The big kicker was: Thailand drives on the LEFT! Talk about an adjustment! I took the bike around the block to get used to it, as Steve had never driven one before. But he was on after me, took a few practice laps, then off we went!

Our peaceful countryside drive started out quite a bit busier than expected as we were on the major highway out of town. But we just kept as far left as possible, letting other bikes & cars go by at faster rates. Before we knew it, Steve had it down pretty well, passing slower carts, cars, and bikes. We practically looked like locals!

Once outside of Bangkok, the English signage diminishes drastically. This made navigating quite challenging. We had the map from the hostel, which is more of a concept map, rather than a navigational map. But good ole Google Maps helped to find turns and locations, though Thai script is difficult to decipher.

The plan for the day was to explore and enjoy the motorcycle trip, anything else was bonus. We made our way around Ang Sub Lek lake, stopping at a lovely, albeit rundown, waterside food stand. We ate lunch out on a floating hut on the water, enjoying being the only guests for the first half of our meal. Very serene, almost desolate, location.

We then navigated farm roads through the sunflower fields to the remote temple of Wat Khao Chin Lae, aka the peacock temple. This temple is home to many friendly monks & nuns, a flock of peacocks, troup of monkeys, and a 436 step climb to the White Buddha statue. Our climbing effort was met with a smoke-hazed view of the surrounding jungle valleys, but a welcomed breeze as we enjoyed the solitude of the 1000 foot ascent.

Our evenings in Lopburi were spent socializing with other travelers staying at the hostel. This was a nice change of pace since our first week in Bangkok was spent on the go, go, go, then sleep, sleep, sleep. Our first night ended in a few mildly competitive rounds of a card game called Dutch, taught to us by a young French couple, Hugo & Jenny, & German Nathalie, who met at another hostel & are now traveling together. I’m always very envious of the language skills others have, especially Europeans. Though they don’t speak each other’s language, they are all completely fluent in English to be able to travel together flawlessly.

The next night was spent sharing tales and advice with Scotty from Australia and Robert from Thailand. It’s easy to get wrapped up in your own travel plans and forget that a big part of traveling is learning about other travelers, too. (Friendly reminder to myself.)

One thought on “Lopburi: Monkeys & Motorcycles”