Laos, pronounced “Lao”, had started off terribly. I was awake for the whole ordeal; the winding roads at high speed, reckless driving, and near misses. I knew we would crash, I knew it like I knew the back of my hand, it was going to happen. I was awake when it happened. I was aware of it all. It was pitch black, cloudy skies, moonless night. In the middle of nowhere with no ambient light but our own.

First came the headlights of an oncoming truck, then the horn and hard turn of the bus. I watched the truck move by us within an inch of our bus. Sierra was asleep when it started, I was airborne and awake, conscience and reacting, preparing for us to go off a cliff, emotionally and physically.

I react differently than most. In times of crisis and great stress, time does not blur & speed by; it slows immensely for me. What was a blink of an eye for the others was an eternity for me. I had time to acknowledge that we were crashing and I was airborne. Reacting instantaneously, I righted myself and then caught Sierra as she came flying out of the bunk. The initial impact was over but we were now sliding. Grabbing the bunk rails, I braced myself as we leaned on our side and slid.

When we came to a stop, that is when the screams started. I looked down to see a woman with her head split open from scalp to nose and went to work. I needed my shoes before anything else, I was banged up but not broken and I couldn’t risk getting injured from glass and debris. I focused on getting her and the other gentleman with the head wound to apply pressure and remain calm. I yelled for people to get off the bus, telling them to leave their stuff, and to just get off. I still wasn’t sure we were not against a tree on a cliff side. Getting off was priority number one.

I tried to break out our window and it wouldn’t go no matter how hard I hit the corner or middle. Sierra called out the hatch above and I used all my strength to get it open, only to be let down that it would only vent. A loud bang then a hiss, the tire had blown, the smell of stale rubber air permeated the back cabin. Panic set in for the other foreigners, they yelled “Gas, Gas, Gas.” Yelling again to get off the bus, people started to make way to the front.

The entire front end had been crushed, it was a tight squeeze to get to the front. Helping Elliot, forehead wound, and Paige, huge wound, to the broken window, I laid a blanket over and steadied him as he climbed out. Then pulling Paige out of the window, we made our way to the front of the bus. I had them sit while I went for my first aid kit under the bus. First aid kit in hand I went to work, treating the injured and assessing the rest. My work did not stop until we were done at the hospital. We would later find out that the road was the second most dangerous road in the world.

Laos: we found Laos to be almost the polar opposite of Thailand. Only a small few were kind and helpful. Three that we had met, to be exact: a Tuk-Tuk driver, hostel manager, and a market vendor. Our Tuk-Tuk driver never hounded us for money, waited for us at the Buddha Park, and gave us helpful info on prices for things in the area.

The Hostel manager was a nice quiet mouse of a girl. Upon finding out that we had been duped for a mini bus we chartered, she became a raging lion and sorted out the charter company quickly. I could not find pants to fit my large legs so the market vendor specially made some for me. After taking my measurements that evening, she had them ready the next day for no additional cost. 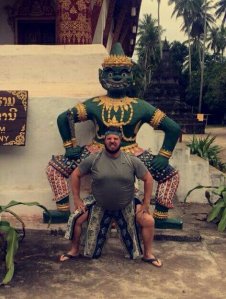 Everything was at least 2 to 4 times as expensive. Nothing we paid for was easy. Every time we chartered a mini-bus, they tried to put us on a bus. There was no way in hell we were getting on a bus again in Laos.

At every occasion that we exchanged money, they tried to short us, by giving us packets of currency where the middle was not the same currency as the outside. Every time, we caught them and every time, they played dumb. Other tourists were not as lucky. The vendors consistently said they had no change. It was until you asked for your money back and walked away that change suddenly appeared. Drinks were consistently added to our tabs and others. It was like the entire country was filled with con-artists. 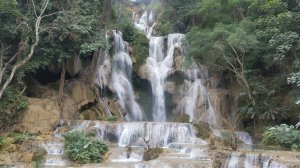 The highlight of our entire trip was the waterfall we went to with the boys: Joel, Elliot, and Josh. Sierra and I were glad to be done with Laos. We stayed in the capital a few days to get our visa sorted out and when it was, we got the hell out of dodge.

We ended up spending 20,000 Baht in one week in Laos, something that we could stretch to almost three weeks in Thailand. Thinking about the crash, we weren’t suppose to have been on the bus. It was the night before, at the very last second, we decided to not take the slow boat. We were on that bus and we did the best we could with the limited supplies & severe injuries. Somehow, we all made it out mostly unharmed and we are all better for it.

3 thoughts on “A week in Laos, a week too long”