It’s amazing how you can spend months of planning and thousands of dollars on gear to have a good leg up on your upcoming thru-hike, only to have the whole event compromised by a $30 pair of insoles.

Steve’s foot perils all began when his standard insoles began to bunch up while hiking. No problem, he thought, we’d be in civilization soon enough, he’d get a new pair then. Pickings were pretty slim in Ramona (off MM 52), but the sales associate advised him to the model which was similar to the Power Step insoles he had before.

Off to Warner Springs (MM 109.5) we went, though the new purchase quickly did not live up to its promise. The desert heat causes the body to retain water, typically swelling the appendages. Though his shoes were sized up to accomodate typical hiking swell, this desert swell proved to be a bit more. His heel swelled to overfill the narrow heel cup of the new insoles, resulting in blood blisters rimming his heels. The discomfort and pain from these blisters caused him to walk on the balls of his feet to keep pressure off his heels. This put a lot of pressure on a small part of his feet. A few miles outside of Warner Springs, our friend James gave Steve his spare insoles, hoping they would alleviate the pinch. This helped with the pain until we reached town. 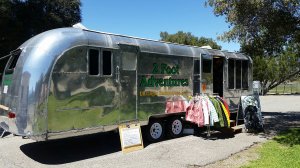 In this small town, the community center opens its doors to hikers to camp, wash clothes, and shower. A small mobile sporting goods business, Two Foot Adventures, also sets up shop at the center to bring relief to hikers in need of new gear. I purchased the infamous sporty Injinji toe socks to attempt to alleviate my bunion/toe issues. I’m also the new owner of a pair of sun gloves to replace the snazzy bandana hand covers I’d been sporting to protect my poor hands from that scourching desert sun. Steve worked with the sales associate to find a new pair of shoes to help fix his ailments.

They decided on a trail favorite, the Altra, which have a very wide toe box and good volume in the rest of the shoe to allow room for his high arch and instep. This change almost instantly reduced the swelling in his feet. His heel blisters had been healing since James gave his spares, so walking was becoming easier in some aspects. But, a bigger problem developed from the offending insoles.

By the time we reached Idyllwild (MM 168), Steve’s foot problems had progressed to a new level. We set up house at the San Jacinto State Park campground. Fortunately for us, our tent neighbor, down for the count with tendenitous, was a former military medic for 10 years. With foot problems being a common occurrence in the military, he helped diagnose the ailing patient. 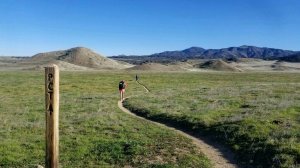 The pressure blister which had formed on the ball of his foot had migrated under the skin across his foot, effectively separating the top skin from the fattier layer beneath. We had cut into the blister a bit to see how it was healing since his other blisters were healing well. This incision allowed us to see the very raw, pink, new skin developing underneath the problem. Had he kept walking on this blister, the same spreading could have potentially spread along his whole foot, essentially sloughing off his whole layer of skin. Steve & our medic neighbor, Coyote, agreed hiking should be halted until this new skin was healed. This news was no bueno.

Our trail family joined us in town the day after we arrived since we hitched in before the fire closure alternative to get him off his feet. We all took a zero day together: shopping for food, charging devices, washing clothes – all the essential day off tasks. 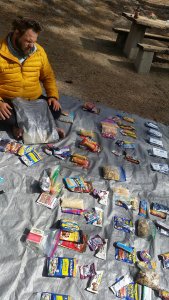 We continued to monitor his foot’s healing status, but quickly realized we’d be making Idyllwild our home for a while. The following day, we had to say goodbye to our tramily (trail family) who we’d been hiking with for almost 2 weeks now. It was sad to see them off, but hopefully we’ll see them again some day along the trail.

We enjoyed meeting new hikers throughout the next week. We had set up quite a nice home in the campground, obtaining a large tarp left behind by another hiker, which we set out as a large “living room” for others to gather and visit, do yoga, read in the sun, and just enjoy their zero days. At night, we’d gather around the campfire, cook s’mores and swap life stories.

We took a daily “pilgrimage” to town to test out his foot’s comfort level and browse the local happenings, like the farmer’s market, Taco Tuesday, and a variety of tasty delicacies. We enjoyed shopping at the local church’s garage sale, buying some fun clothes to send home, and some to take on trail, as well as a small camp chair to enjoy while at “home”. 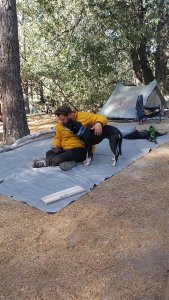 After a week of healing, Steve’s foot seemed to be mended enough to hit the ole dusty trail again. 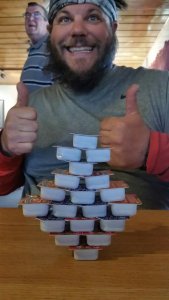 4 thoughts on “The Soulless Insoles”

Breakfast with the locals 🐬🐬
Swim into the sunset.
Sunsets are beautiful here, but have you seen these stars??