We ate breakfast at a the small town cafe, having biscuits, sausage, eggs, and bacon. Our bellies full, Huckleberry and I said goodbye to MacKenzie and Cash, knowing we wouldn’t seem them again most likely.  They were taking a zero day to recoup for Cash and we were going to do some bigger miles. Getting a ride out from the cafe owner we prepped for our trip ahead,looking at the itinerary and mileage. My only thoughts were on getting much done as possible. I was hoping to put 20 miles in again.

We started up the hill side coming to a large open field with long flowing grass. The dew soaked trail gave us a surprise in the form of a few reptile eggs unearthed right in the open. Careful to not break them, Huckleberry moved them to the side of the trail for safety. There wasn’t much we could do, nature had to take its course,  yet we didn’t want some unsuspecting hiker to crush them inadvertently.  Up the slow rolling hill we climbed at a steady pace, the heat evident already, indicating it was going the more hot today. 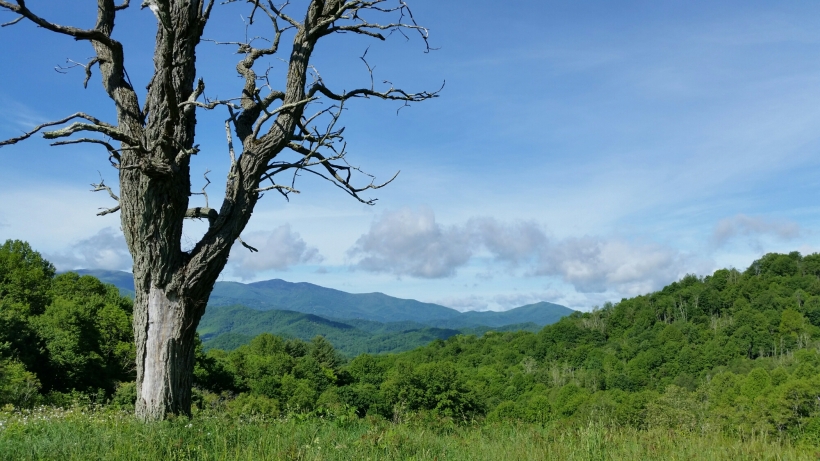 Reaching the top of the hill we saw a nice view on either side of the open hillside of the mountains in the distance. That wasn’t the best part though, the huge tree with grand sweeping limbs ,prime for napping was.  Looking at the tree you could just imagine laying up there taking a nap in the heat. Coaxing Huckleberry a bit he did just that, climbed up as swift as a cat, right out onto the limb and relaxed for a moment. Sometimes you just have to enjoy those small bits before getting back to business.

Down the back of the hill, through the woods we hiked, coming out at a cemetery. What an odd place for this I thought, out here in the middle of nowhere.  The truth was we weren’t in the middle of nowhere. Every mile or so we would cross a road or hear one in the distance. Crossing one of those roads we came across a stray beagle.  This adorable young beagle with his shiny collar was soaked and somewhat timid. Coaxing him over I was able to get the details off his collar.  Creating a makeshift leash we set off again in the direction the dogged come from, calling the owner over and over. After multiple tries he finally answered the phone, explaining that we had found him way out in the woods and such the owner had one thing to say, “Turn em loose.”

Now there was no way in hell I was going to do that. That is exactly how the dog wound up with us in the first place, turn em loose, good luck with that. Explaining that I couldn’t do that after a bit of conversation I was able to get an address for the home of the dog. Walking down the road Huckleberry and I spotted spent .223 casings, beer cans, and run down mobile home with two hound dogs roaming free in the yard. Before I jumped to any conclusions I knew it was the place, but hoped it wasn’t. I walked up on the porch, putting myself as far away from the door as I could.  Leaning forward I knocked twice on the door, returning back to my spot four feet away.  There was no answer after the first few attempts, Huckleberry was keeping watch by the road covering me.  We flagged down a vehicle and spoke to the owner about the house, just as the homeowner came out.

This very large shirtless man came out, his disheveled hair smashed against one side of his head, his rotund stomach hungover the denim shorts, to which the button strained to keep them from falling down. His mouth opened showing a plethora of missing teeth before he spoke, saying “whachu waont.”  I explained that I had brought the dog back he was found very far away from the house and I had talked with the owner. His only reply was turn em loose before he disappeared back into the house. Returning only to throw a handful of food on the deck as he called the dog over with a whistle.

Huckleberry and I got back to the trail quickly leaving behind our biggest impression of Tennessee.  Getting back to the trail we passed through an old tree farm and into the wild again. It wasn’t long before we came across a hand written note that instructed us to go to Jones Falls down a blue blaze. Taking the instructions we hiked the .1 miles to the falls. We were definitely rewarded with a view of a tall waterfall, the water cascading off a sloped rock face, falling 30 feet before it slide down a second sheer face below us. We took our time here resting and eating.  We were joined by a college class at one point who told us they spent two weeks out in the woods hiking and learning about the ecosystems.

Leaving we got back into our groove, we had miles to do, that was until we came to another note.  This time saying somehting illegible, with a clear path to our right we ventured out to see what it could be.  We’ll I’ll be a horses ass, it was another waterfall, this time on a river that we could swim in.  Taking no thought we stripped down and dive right in swimming and playing.  The fisherman weren’t very pleased but we hadn’t noticed them when we dove in.  Saying we were sorry we dried off and headed out after taking some photos.

The rest of our day remained uneventful as we hiked to the next shelter and ate. We would then hike to our last view point on a bench before the final 6 miles to our resting place. The view at the bench offered us a moment to relax before crushing out the rest of our 20 miles for the day.  The give book informed us that the water source at the shelter was a long way off so we took our chance at the last water source. The book said there were multiple streams that turned out to be trickles at best.  Taking forever to fill our water we plodded into camp, tired, sore and hungry.  I would eat two dinners that night before passing out in the shelter.