Leaving town isn’t always easy, but I was on a mission and this time for me it was a quick resupply. McDonald’s for wifi and the dollar store for food and off I went to CVS to get a toothbrush. Wouldn’t you know it Moonlight and Moonlover were there too.  Quickly shopping the thee of us had our food explosion outside on the sidewalk.  The other shoppers would look on us and wonder who and what we were doing. The looks on thier faces said puzzlement and confusion, s if they weren’t sure we were all homeless or not.  Little did they know that we were long distance hikers embarking on a once in a lifetime event.

We left with one mission for the day, just get over the mountain.  On our way out we had to cross a bridge before going back up the trail.  Little did we know we would find a familiar face laying in the shade, on a small little patch of grass relaxing. Warren Doyle laying as hard as any person trying to do nothing ever could called us over and started to chat. He informed us that the river we just crossed was one of the oldest in the US. That when the Appalachian Mountain range get was formed it cut all the rivers off reversing thier direction, except this one.  It was so strong and robust it cut through the rocks and continued as it always had. Flowing in the opposite direction.

It’s neat how the things you learn are never what you expect when you are open to new expierences. I find I learn something new everyday from Warren and I relish in what it might be next. Saying our goodbyes we left in the heat of the day up the trail. The long switchbacks made great trail, but the heat soaked us in sweat. Up and over one ridge we went down to a farm field, finding sweet water, shade and a bit of rest before making our big climb for the day. The long switchbacks and heat would end up draining us more than we expected.

By the time we hit the water source we all were hot and tired, drinking our fill and refilling our bottles, we resumed our quest for the shelter. Over the rocks and roots we went, it never changes, the large rocks weighing undress of pounds are never stable.  Each step rocked the rocks back and forth as our balance changed while walking over, the occasional sliding rock was apart of the hazard. Finding ourselves close to the top we saw there were no more switchbacks, just the trail going straight up the mountain. Straight up, no turns, steep gravelly dirt moved under each of our steps. The open trail and no breeze made it brutal. Fortunately for us it was short lived, closing in on the top we spied the privy, I couldn’t help but laugh in amazement. The privy was a bucket with a seat on a platform, just one wall to block it from view from the shelter, not the trail, the shelter. The shelter faced the opposite way, rendering the wall useless.

Finally making it to the shelter we only thouht of food as our bellies growled. They ate pizza from lunch and I ate my heaviest items too.  The whole while thinking that I might just want to stay there on the open hill for the night, catching sunset and sunrise instead of hiking to the camp site.  I wasn’t the only one with the idea either, that settled it for us. We set up our beds on the hill and took in the views for the evening. 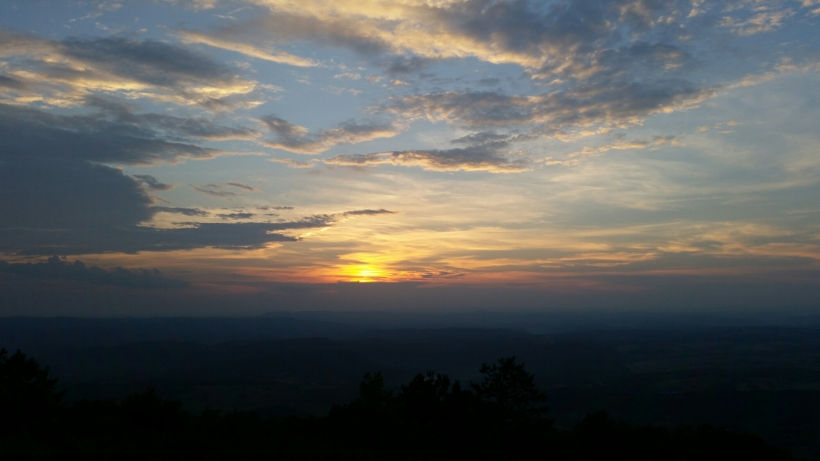 It can’t always be about the miles, some days have to be about the smiles. That day was one of them, without staying with them I wouldn’t have gotten to know them more.  Moonlight and Moonlover, two amazing people, would leave an impact on me.  They both have done plenty of trail work over the years and I learned quite about what it takes to make a trail. Causing a deeper appreciation for what I am doing and what certain actions can impact. The three of us sat and talked while the sun came down, taking pictures and relaxing from our short day out.