The lasting effects of our trail angel still affected me the next morning. I awoke feeling rejuvenated, free from my depression and feelings of self doubt.  Everything was clear again, her kindess and company quelled the negativity that I had been dealing with the past week or two. The two of us packed up and hiked out up the mountain. Huck had left before me which meant I was about five to ten minuets behind him. I was just about to the first shelter, a tenth of a mile or less when I happened across a man and his dog.

This man had constructed a litter for his dog and was dragging her up the mountain trail. Dropping my pack I knew how the situation was going to unfold before he did.  Asking him if he needed any help, it was obvious he was rattled and worried. I explained to him my history with dogs and asked if I could check her out.  He had said she couldn’t walk and one look at her paws explained why.  She had blisters that had ruptured on a few of the pads, probably due to heat but anything could have caused it. I offered to hike her out if he took a few things from my pack, my two months of trail legs would get them out faster if I carried her.

Placing her in my pack, we were off back up and over the three miles I jad already hiked over the mountain. Over the next hour, we got to know each other as she rested her head on my shoulder from the site of my pack.  Getting to his car could be a problem,  but I could at least get her out for him. Coming to the gap, I placed her on the ground and put out my tent fly for her to lay on, I’d have to get her cleaned up next.  The only thing I had was water, I filtered it and cleaned her wounds before getting out the only bandage I had, a maxi pad. Just then a car peaked over the road and I flagged them down, there was no signal here and I asked if they could get help for us.  She said she would call the sheriff when she got signal. 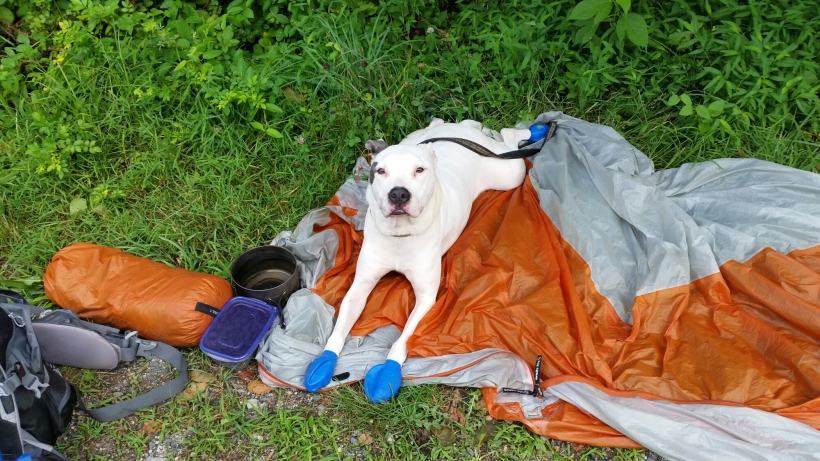 Two minutes later a state trooper drove by, he the owner Aaron, flagged the trooper over and the car came to a stop.  The trooper walked over and asked if everything was alright, eyeing up the situation.  I asked if he had any medical supplies so we could patch her up as Aaron inquired about a ride. The officer more than willing to help fetched his med kit and told him he’d be happy to drive him to the gap to get his car.  I patched her up and told Aaron I’d wait here while he went to get his car.  Just then another trail angel appeared and offered to give Aaron a ride to his car.

Dog patched up, Aaron on his way to the gap with the trail angel, the two of us sat there next to each other. Just a man and a dog resting in the shade, if the day couldn’t have gotten better a animal control officer showed up. He had gotten the call and wanted to know what he could to do to help. Catching him up on the situation he gave me his card and a few protein bars and asked us to call him when she had gotten home. I thanked him and went back to more pressing matters, napping with the sweet dog.

When Aaron arrived we said our goodbyes and off I went back up the mountain. This was the beginning of the end of the day for me.  The next twenty miles would be nothing but rocks and more rocks.  I hate friggin rocks, miles of uphill over rocks to Humpback mountain which was nothing but rocks. It’s as if every rock formation was on the trail.  What makes matters worse is knowing someone deliberately made the trail go over all these rocks.  I could see a rock wall just off the trail, where people had cleared it once of rocks, but no longer.  Just a minefield of rocks for a trail. The plethora of rights and left started to disorient me on the top of the mountain.

I had walked across a huge open rock structure where the trail half circled around the rocks only to walk the opposite way by one so similar, an hour later, I thought I had walked in circles. I had had it, I lost my shit right then and there. Hulking out I screamed at the sky, I hate these rocks, I hate this trail, I hate this state, f this shit, Virginia is flat my ass, OH its smooth what a crock of shit.  Picking up rocks in the trail the size of melons, grapefruits I flung them with such velocity, that they shot out of sight over the mountain edge. I took to smashing them on the ground for a moment in fit of rage, when that hadn’t sated my fury, I grabbed a large dead branch and began smashing it on the ground as well.  20 plus miles of rocks and heat, this was the shitiest section of trail I had walked on, even the Smokey Mountains weren’t this bad.

Tired and sore, my feet pummeled by the miles of rocks, I came to and water source.  Drinking my fill from the ice cold spring I decided to stay here for the night, in the forbidden zone. I had no more energy for the day, pitching my tent I curled up in my bed just before I head another hiker descend the path.  Equally frustrated and sore he saw me and joined me.  We sat there for a moment or two bitching about the onslaught of stone we had just hiked through.  The two of us would be fast sleep from our exhaustion, with no dinner had we slept soundly. I was just 9 miles short of Waynesboro which signaled the end of Virginia for me.