Kim and I headed out the next morning from town. Excited to hike together we talked about everything that had happened since we last saw each other. I teased her for how heavy her pack was Ndshe reminded me she was hiking out a pie for Zen. I wondered how much he that thing weighed because there was no way it could be light. On our way out of town I had to eat again and we decided to go to the local ice cream shop for a shake. This would prove to part of her downfall for the day. The delicious vanilla malt vanished as I chugged it before heading out.

The state park in town was beautiful with the trees and well cared for trial, a stark difference from the trail leading through the state. When we came to the only water source, a stream, we were greater by a family from eastern Europe. Within in minutes they were talking with us and asking all sorts of questions. They knew more about long distance hiking in America than most Americans. It was so refreshing to talk with them and learn about what they liked and we’re doing here. Filling up our water we started our climb up to Mount Minsi. The heat beat down on us as we climbed over the rocks and roots during our 1000 ft climb. I stopped every so often to check on her as she huffed and puffed behind.

When we reached the top it was clear she was having trouble, sweat dripped for every part of her. There were beads forming on her face as she sat down on the old steps. Taking her pulse I realized what was going on, she was overheating and the climb had taken everything out of her. Looking at her I couldnt help but laugh. She wanted to know what was so funny since she was suffereing so, I replied to her, welcome to day one. This is what it was like or all of us on our first day. She had become dehydrated and wasn’t retaining any of her fluids. Making her a Gatorade I told her we would rest here for a while. The heat was well into the 90s and we were in the prime hours of the day. Sitting and talking we goofed off till after four when the heat would dissipate a little. The next few miles went quick as we walked along he rocky ridgeline.

Coming to the first view we were surprised to see Zen. She had carried this pie for miles and now it was time to give it to him. He looked beaten, his tired eyes and worn out expression changed immediately upon seeing us. His lips drew back forming his smile as he exhaustedly said hi. He was beat, when Kim told him she had brought him a pie he perked up a bit more. Sitting down on the logs we shared her huge pie and talked. He was heading into town and then resting while we were pushing on. 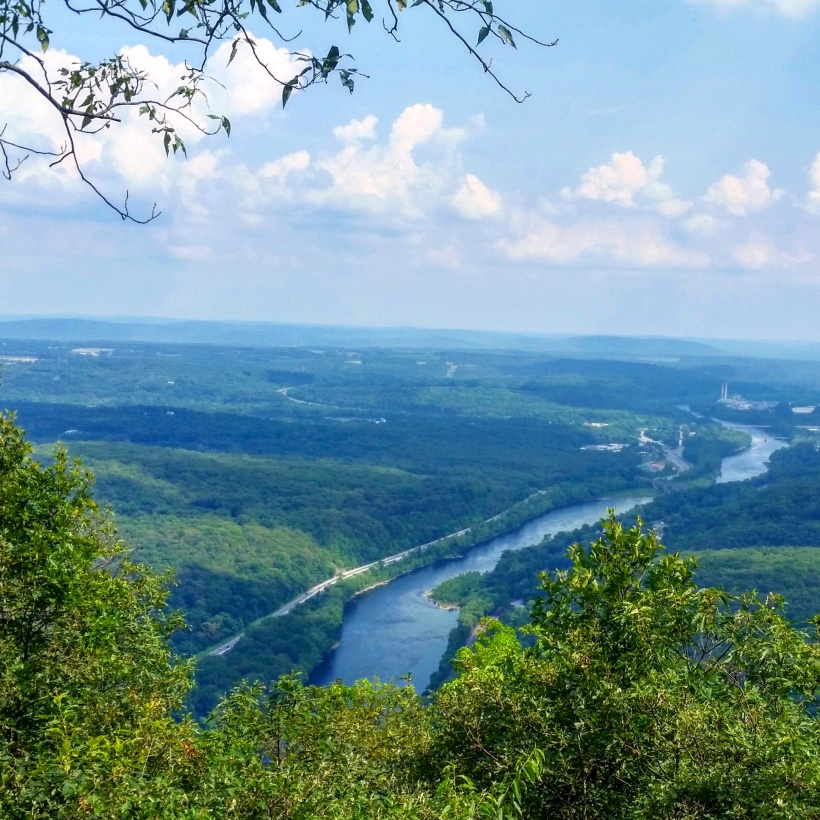 Finishing our hike for the evening we came to a beautiful view of the city below. Looking at Kim I told her since the shelter was close the was no reason to go there we could stay here and watch the sun came down at this pristine place. She agreed as we set up the tent for the evening. I got a fire started and prepped dinner as she went for water for us. When she returned we ate and hung out, enjoying the night air before paying ninja with Phizzy and going to bed. We slept well with the rain pending on the tent for the evening.