Vowing to get back in the flow, we awoke early and headed for town for breakfast.  True to our words we were back hiking by 8:30 in the morning and pushed a hard 13 miles to his mail drop.  I spent most of the morning lost in thought, listening to music. We made great time through the heat.  New York was proving to be very beautiful as we passed the fields of blueberries.  The sparse trees created just enough of a canopy of shade to keep the heat at bay.

The rolling hills and ever changing terrain allowed us a pleasurable hike compared to the states before.  No longer were we lost in the monotonous trail we had passed.  I was feeling off still and needed to get away. Switching my playlist I put on more upbeat music to drown out my feelings and thoughts as we pushed to the road.  If we got there soon we could go into town and get his resupply and put some more miles in before dark.

Reaching the road we hitched into town quickly and I was soon at the post office.  I had to mail back yet again more things I was carrying.  I had been lucky and received some replacement gear and needed to send the old stuff home.  The total weight I dropped was over a pound and half in one shot, I was happy to have that weight off my back for a change.  My pack too large looked empty with the few things I carried now.

Back to the trail we went, coming to a parking lot I looked at the mountain we had to climb and wasn’t looking forward to it.  No pain, no rain, no Maine I reminded myself as we hiked out and up.  Just ahead of me was a day hiker, a young girl is all I could make out as she hiked ahead.  She was steady as she climbed over the rocks and switchbacks.  The two of us should be able to pass her I thought as I picked up the pace.  Boy was I wrong she was moving as we passed over five hundred feet. I was starting to think of how tired and crappy I felt as she turned to stop. 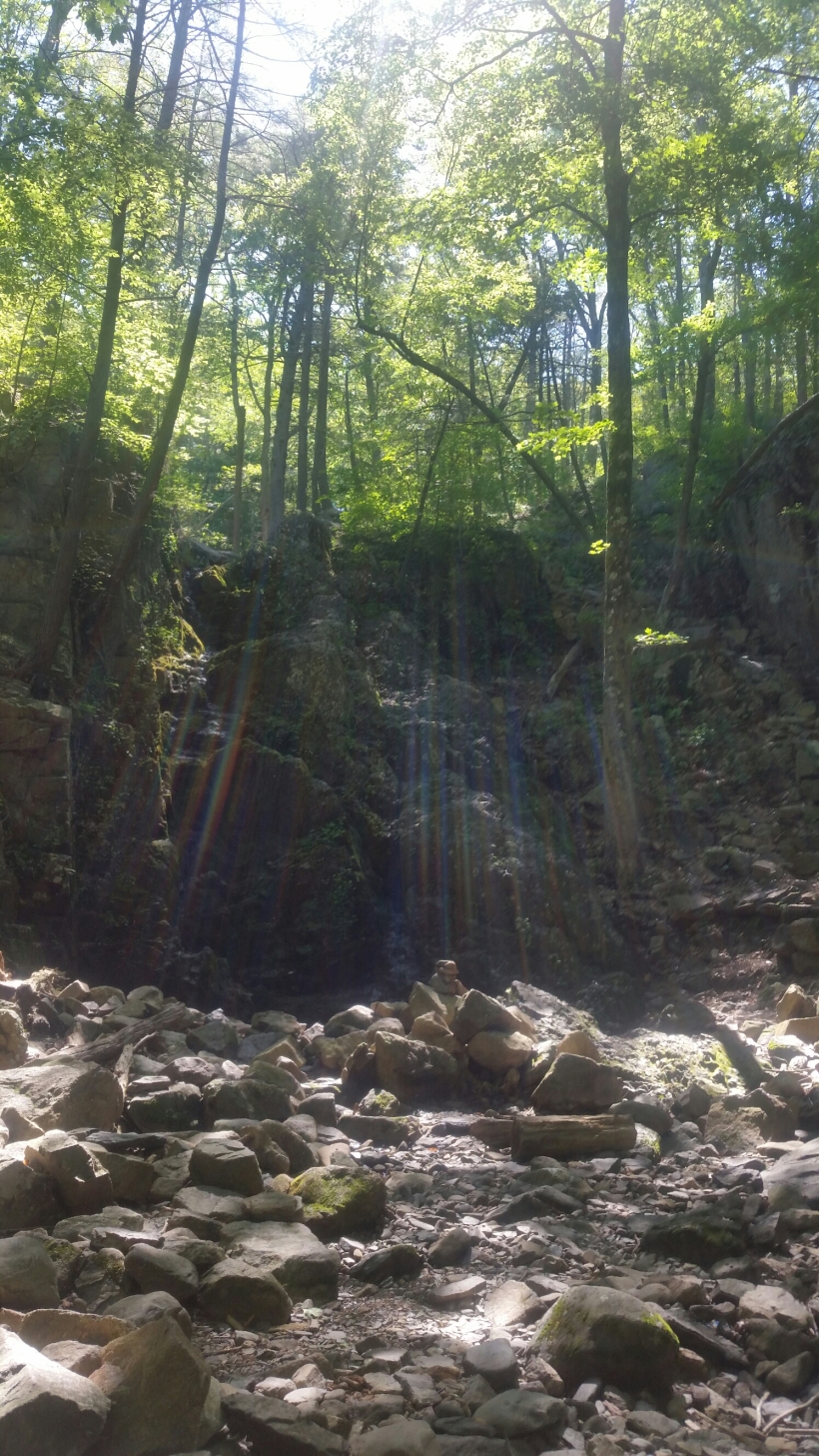 Yelling up to her I cheered her on, she was pulling me up and I’m sure we were pushing her up as well.  When I caught her towards the top, she had slowed just enough that my stamina could take over, I started a conversation with her.  She was on vacation and doing a day hike on the AT.  the normal questions followed and I said goodbye as our trails diverged in the woods.  Feeling worn out and tired Luigi and I looked at a rock to rest for a moment before being greeted by Caesar.  It was so good to see him, we hugged and sat down.

The three of us chatted for quite some time before we were joined by our day hiker again.  Her name was Samantha and she didn’t live to far away.  She had come to go swimming at the lake and I heard the perfect excuse to stop hiking for the day.  With that the four of us were up and over the hill towards the lake.  Caesar would decline and so would Luigi, swimming in a lake, what was wrong with them?  The two of us were off on our own adventure.  I called back a few times goading Luigi into coming with us, finally her took the bait and joined us.  Walking out to some rocks she took off her shoes and went right in.  I dropped my gear and clothes and dove in after and Luigi followed me in.

The afternoon was spent swimming and listening to music till the sun came down.  Jumping in, cooling of, eating, swimming out to the island in the middle of the lake, all sorts of good summer fun.  We talked of all things deep and mystical about why we were on the trail.  “Steven, she said to me, Why cant this be it?”  “Why cant you travel and write all the time?”  I thought on her words as we sat there.  This could be it, just like that, so simple, we would have to see how this venture finished before starting the next one.

The sun coming down I suggested staying for the night and tenting on the lake, I love doing things we aren’t suppose to.  There is a small bit of satisfaction in being a beautiful place all alone.  She had to get back to her car to grab her stuff and like that we were all off back over the mountain.  On our way down she suggested coming back to her place.  She would cook for us, we could shower, meet her roommates, and sleep in a bed.  Trail magic again had grabbed us and I wasn’t about to let it go this time.

Luigi grabbed some wine for her and beer for us as she shopped for dinner.  when we arrived back at her place she started to cook as Luigi and I got our laundry together.  Dinner was ready and we ate the best burgers in a long time.  The fresh meat, topped with an egg and greens was so juicy and delicious that I devoured it in moments.  There was only one thing on our minds, sleep, oh that sweet rest.  She showed us to the spare bedroom in the basement and we were out in moments.