Disaster, I couldn’t believe what had happened, in the night we had tented in the only smooth spot on the peak and it just so happened to be the only spot were water collected as well. Twiggs was soaked through and through, all of his gear and bedding was toast, not one piece of his gear survived the flood.  I was fortunately spared, my sleeping pad gave me about an inch of height above the water allowing my bag and the clothes I was wearing to remain dry. Everything else was not so fortunate. We packed up quickly and are it for the hut for breakfast and warmth.

The steep one mile descent was tricky and slick, each step had to be calculated in order to not slip and plummet of the face. The one mile trail took us the better part of 40 minutes to finish.  With the hut never growing closer in our view we wondered if we’d ever make it there. The hut would slip in and out of view in the clouds, giving it this eery attitude. No lights or movement could be seen as we climbed down. Then I had a thought, what if there was no one there and we were alone, what if they were all gone. Just then Twiggs spoke up to tell me that this was one the most documented place for an alien abduction. No way, I thought.  What if they were all dead I said to Twiggs, like we were walking into a horror movie.  From there we talked plot and how good it  it actually be, two hikers come off the mountain and find themselves thrust into a series of events.

Just then the trail popped  out form below the hut and we blew in like the night wind, through the door. The wonderful Hutese as I call them fed us and allowed us to dry out for the morning before we climbed up to the summit again and into a beautiful day. Reaching the top I was blessed to have clear skies and a good wind going. Setting my stuff out to dry, I placed rocks on them to keep from blowing away. Little did I know that the very rocks I used to keep my sleeping pad from disappearing in the high winds would render it unusable for a week. Once everything was dried and conversations with the day hikers were had, I set off down the trail and down the remainder of the ridge before disappearing back into the woods. 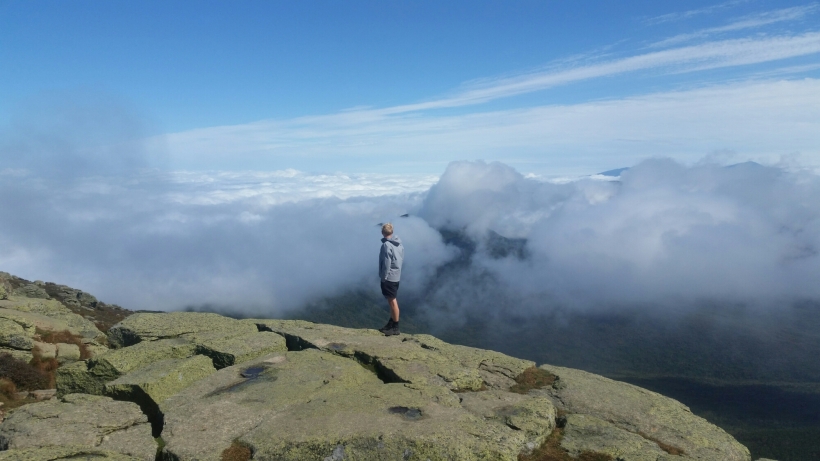 I may my way through the day by myself as I climbed up and over Mt. Garfield and down to the hut. The slick terrain and stream for a trail make the climb down very sloppy and harrowing. I managed to fall quite a few times and in my frustration I called out, “are you trying to kill me, just get it over with.”  Looking up I saw a day hiker with a look of confusion on his face, turning towards him I said that it looks as if I might get called home today by the Lord. Ever confused, I passed the buffuddled day hiker and made my way to the hut.   Reaching the hut I was once again given bad news, the hut wasn’t accepting any hikers and we would have to find a place to camp in the cold damp air. Telling us they were waiting for later hikers, we were unable to use thier services even though there were no other hikers in the miles of us. We would end up hiking further down the trail and tenting in the cold crisp air.