The sounds of the waterfall had me fast asleep and down for quite some time.  We were late getting out that morning and sure enough, as always he was raring to go.  Flailing and I headed out behind her as we talked about nonsense and other things.  Climbing up wildcat took quite a bit of effort, I felt as if I was drained, each step was labored and slow for me.  I wasn’t the only one that was off.  Watching Flailing just ahead of me, it was apparent he was feeling bad too.

His steps, normally quick and deliberate, were labored and slowed.  His footing, so sure normally, was shaky and questioned.  He would pick his feet up as he was stepping up, missing the step on his first try, hovering a little before lightly placing his foot down.  As if he couldn’t trust what he saw.  Flailing’s unstable footing and loss of balance was very apparent as we climbed up boulders and rock faces.  Things he would normally just walk right up, he struggled with, swaying back and forth.  He was not doing well, and the only thing we could do was to take many breaks on the way up.  He was exhausted and in no condition to push hard.

By the time we reached Wildcat peak, Earthling had been there a while and let us know what our options were for food and such.  I caught her up on Flailing’s situation as we discussed our options for the day.  Our best option was the hut and it had shut down the previous day.  We had already lost four days due to an intestinal thing and now we still weren’t better.  I was worried and she knew it.  We had to get Flailing to a place with water and shelter, hoping maybe the winter caretaker could let us stay somewhere close by.

Pushing down the mountain, the two of them hiked together as I hit the views taking pictures on our way down to the water source.  Here we sat discussing our options and as bleak as they were, the only one we had was maybe the hut.  It was bleak but we hoped for it none the less.  Reaching the hut we were in for a surprise.  The Hut master for the winter was none other than the girl behind the desk we had met the week before. 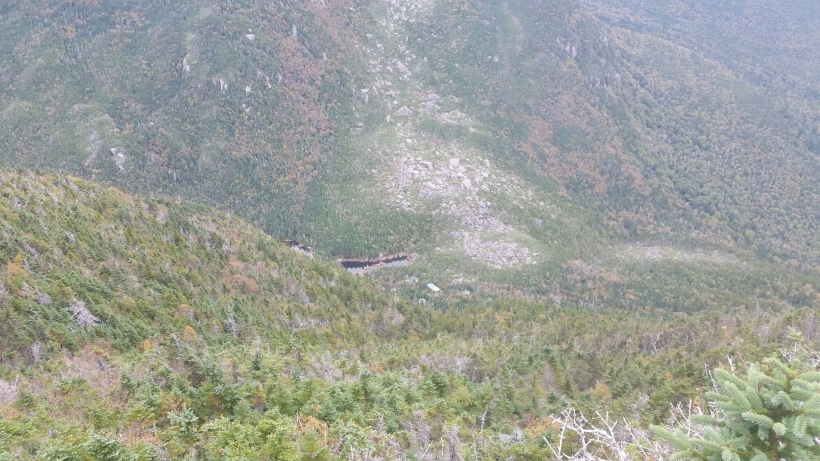 Quickly striking up a conversation we enjoyed a game of Banana-grams in the warmth of the hut.  She had offered for us to stay and without a hesitation we took it.  Our small party was soon over run by other hikers who had heard our conversation.  I felt bad, here she was doing us a favor and all these other people were taking advantage of her kindness.  Our group of three soon swelled to ten on the floor of the hut.  Hikers were sleeping under the tables, so much for the restful nights sleep we looked for.