I slept a little, not much, but enough to be 100 percent for the morning and that was all I needed.  I quickly chugged my energy drink and got out of my bag and into my gear. Earthling, so excited, broke out in song as she emerged from her cocoon of a sleeping bag.  The three of us laughed a bit and told her she was way too excited for the hour we were awake.  It was six in the morning and no light was in sight.  Our breakfast was eaten by headlamp light as the others caught up.  None of us talked much as we packed.  My thoughts were only on the climb ahead.  My hands steady, as I packed up the last of my gear.

When we were all set, we walked out of the last shelter of the trail and down to the ranger station to drop off our gear.  The three of us walked together to the trailhead and kept together over the first mile.  Flailing needed to go to bathroom and, knowing it was the last and only privy on the trail, his goal was to get there quickly.  Our brisk pace over the smooth gravel trail allowed for conversation and silliness. Crossing over the stream, we waited for Flailing to use the privy before starting our five-mile climb.

Up the three of us went, up the stone steps that so many others had climbed. Once we passed the steps, I could no longer hold back.  The caffeine had done its job, my heart was pumping me full of adrenaline and energy.  I was on my turf:  the long steady up.  In just minutes, Flailing and I were quite a ways ahead of Earthling.  Turning back to look at him, he said he lost his glove. Without a thought, I pulled my liners out of my bag and gave them to him, telling him I’d see him on the other side. I was off again, steady and fast. I climbed up the few steps, streams, and obstacles that were in my way.  My hamstring aching and throbbing, I drove on, pushing through the pain and stiffness.

My music was playing and I was without thought. Two thousand-some-odd miles of preparation had fine tuned my muscles, hand-eye coordination, and brain into a mountain climbing machine.  I was on auto-pilot in the treeline as I climbed the next two miles. Coming around the corner, I was hit broadside by the cold crisp wind.  Whisking the sweat and heat from my body, I dropped my pack and in no time threw on my rain shell.  Then, back into motion again, no time for rest.  With my legs moving in rhythm to the music, I crushed out the rest of the smooth trail and reached the ice.  The trail was slick, coated in two to three inches of thick melting ice.  I stopped, donned my crampons, and waited for the others to catch up.

When they arrived, we hiked together.  From there on out, the terrain would not be safe solo.  The three of us took care to watch each other’s footing and hand holds as we climbed over the boulders and rock scrambles.  We broke out of the tree line and felt the temperature drop severely.  With no trees to block the wind, there was no warmth or escape from the elements.  The day had called for clear skies, but we had none of that; just a few hundred feet of visibility.  Taking our time, we threw on our warm layers and pushed further up the mountain.  The sheer rocks, boulder scrambles, and tricky climbs did not deter us.  On the other hand, the ice and snow-like frost which blew past only slowed us and made us more cautious as we negotiated the terrain.  Removing our crampons, we made better time over the wind-blown rocks than the icy sections in between.

Up still, we climbed, passing over ledges and rebar hand holds.  Our only break was a small flatter section before continuing our vertical ascent.  The wind blowing strong and constant killed all the sounds around us.  I could feel the frost forming in my beard and on my gear.  We were exposed and would not be back to safety for quite some time.  Each of us looking out for the other, we climbed on and on.  The higher we climbed, the less visibility we had.  Reaching the table land, a mile-long section of flat rocky alpine terrain, we put our crampons back on.  The entire section was covered in ice and snow, the snow drifts upwards of two to three feet high were frozen solid only on top.  With too much weight or force, our feet plunged below into the snow, up to our knee or higher. 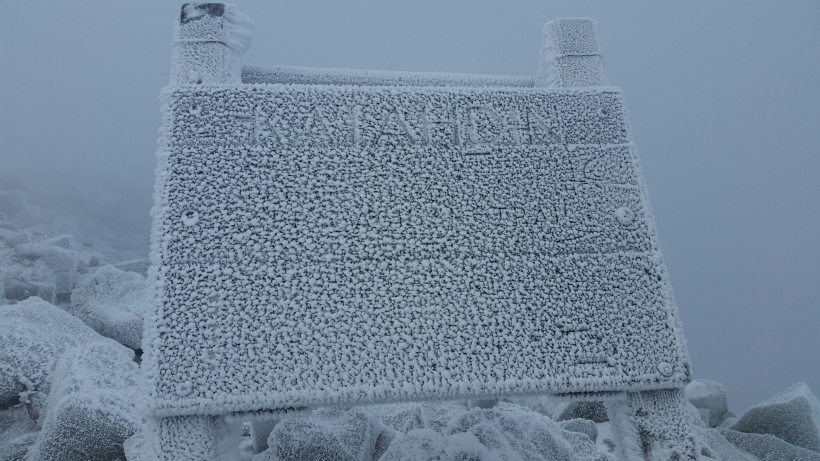 I could only see a hundred feet at best; the cairns were our only way of navigating.  With some buried in snow, they looked more like small rocks than our markers.  Taking our time, pressing on, we finally reached the last climb.  This rock scramble over ice and snow-covered rocks floated by.  I had gotten into a rhythm again and the three of us pushed farther up.  With no warning or notice, the summit sign appeared out of the mist.  We had reached the top.  Our journey was at an end.  Each of us took our moment to approach the sign and pose. Walking over, my face and body covered in ice, I knelt down next to it, pounding my fists down in an act of defiance.  I had beaten the mountain.  It had thrown everything it could at me, and I had won.  Walking behind the sign, I climbed up, my arms formed a V as I roared out to the mountain like a grizzly bear.

Taking a few more pictures, the three of us helped with my bag.  Roland, my ever faithful companion, was with me.  I had carried him the entire length of the trip, as he had carried me in life.  With few words, I opened his urn and scattered his ashes into the wind.  He was now, and always will be, a part of the mountain.  The two of us had walked the Appalachian Trail.  Giving him the best send off I could, I said goodbye to him for the last time.  The three of us without words walked away together.

As I limped away, I again refocused on our treacherous climb down.  Navigating down proved to be harder than up.  With no judgment of depth in the wind and snow, it was hard to pick out the trail.  It all looked the same.  Reaching the table lands, our pace picked back up and stayed strong all the way over the ice until we reached the long descent.  Removing our crampons, we slowly made our way down the mountain.  Going down in the wind and ice was much harder than coming up.  The risk of falling was so much higher when you were lowering yourself down.  The climb down seemed to take forever, then out of the blue we saw a familiar face.

A lone hiker coming up the boulders, Earthlings dad had climbed up to meet us.  Seeing her father, she yelled over and over in excitement, she couldn’t believe he was up on the mountain.  I have to admit I was equally excited to see a familiar face in this tundra.  The other-worldly characteristics of the mountain had me craving a bit of familiarity.  It was good to see we weren’t alone on this day.  Just like that, the four of us made our way down the rest of the open rocks into the treeline.  The next three miles or so went by slowly; not because it was tricky, but because we all were talking with each other.  My leg was killing me, my limp had become worse.  I could no longer hide a pulled hamstring from the others as I fell behind on the way to the car.

We all piled into the car, headed for Bangor, with just one thing on our mind:  Five Guys.  Feasted and full, the three of us rested on the way to Rhode Island.  As I messaged people over the phone, they were excited, saying I had walked from Georgia to Maine and that was incredible.  Was it that incredible?  I just walked everyday.  I had walked in the rain, wind, snow, dark, light, heat, and freezing temperatures; over rocks, roots, streams, rivers, roads, and across thirteen states.  I carried the ashes of my dog, Roland, every step of the way.  I made life-long friends over our shared suffering and raw, unfiltered emotions.  I had accumulated so many stories on this adventure, from fighting bears, racing go-carts, petting wild ponies, and hiking across four states in one day.

For those that hike it south, I’m not sure if they have the same appreciation for the end as we do.  All the miles, the long grueling mental days, prepared us for what lay ahead.  The beauty of New England was unparalleled compared to the South.  The end couldn’t have been more fitting:  the most difficult mountain of the entire trail was our finish.  We would finish on a high note, not coast in like the south bounders do.  We had climbed Katahdin.  I had climbed Katahdin.