We spent every weekend together in the park for the most part.  With the unusually high amount of rain fall, we spent most of our time in our tent, learning and growing closer together.  It was nice to relish in how easy it was together. Things just flowed and we went with it.  I traveled to Kantishna for solstice and met her friends and coworkers.  Solstice was quite the event. It’s really just a big party, but it was a celebration of 24 hours of light.  I played drunk wiffleball with the other lodges.  It was quite the sight to see people trying to hit, run, catch, and throw with a drink in their hands.  Every so often,  I’d steal a glance from her and continue with the others. 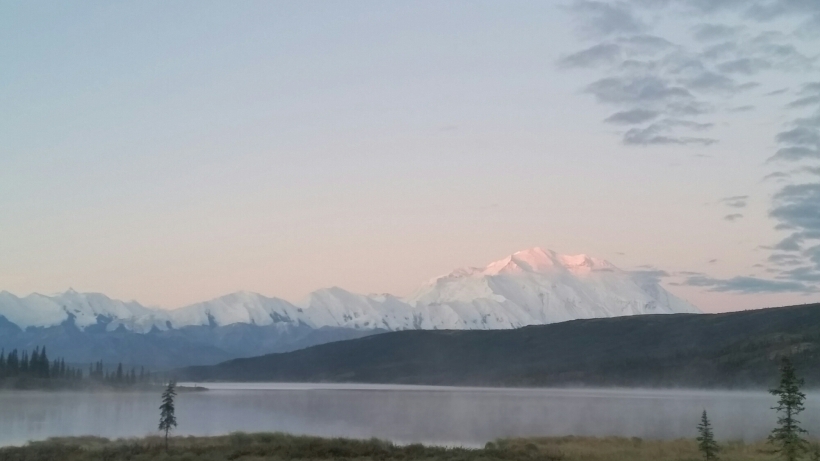 That’s how it went, light and fun.  Never at a loss for words, we spent our free time together in the park, most of it uneventful except a few occasions.  We were out hiking around Sunset glacier and were preparing dinner when our day drastically changed.  She was boiling water as I noticed the rain coming in again.  Seeing she was chilled, I offered to grab her jacket and the spices we forgot.  I stood up and started away from the glacial erratic; that’s when our night changed.

My heart rate rose instantly, pumping me full of adrenaline, my muscles tightened, and a wave of calm came over me.  Time slowed as the chemicals hit my brain.  I was less than 40 feet away from a very large grizzly bear.  She was blonde and easily twice my size.  Her large head and thick fur coudn’t hide the power and muscles underneath her large hump and size.  Unaware of my presense I gave out a quick sharp Hey Bear!  Her head snapped up and looked right at me, there we were looking at each other, seeing and evaulating each other.  I quickly called for Sierra to get by my side.  Not understanding what was going on, I said Bear and she quickly joined me.  Looking at the bear she saw we were together.  I gave out another Hey Bear! As if to say, Whats up brah?

Looking ahead briefly she eyed out the river and I knew she was heading there.  She took her gaze from us and started walking to the river’s edge.  Her distance remained unchanged as she slowly meandered her way to the edge.  Dropping her head she lapped up some of the cool, crisp, silt-free water, letting us know she didn’t perceive us as a threat.  I knew in an instant if she continued along the river’s edge it would bend her back around our backsides right into our camp, and that would not be good for us.  Making my way to the other side of the large boulder, I put myself between her and Sierra on the rock.

Sure enough she followed the river’s edge and noticed me again.  She stood there for a minute and pondered her options.  With the same respect and awe, she looked one last time at us as she started into the water.  The sheer force of the current pushed her back with each bound she made.  With just a few bounds she was on the other side and about 100 feet from us.  Raising her head she shook the water off like a wet dog and sniffed the air.  Just like that, she started her way over to the hillside and began foraging for food.  She dug up roots and ate berries, as we ate our dinner.

This moment forever engrained in our hearts was truly majestic to say the least.  We both were doing what we were meant to do and sharing each others company in this remote desolate wilderness.  We sat there for about an hour as she ate on the other side and we both took our cues to head out as the rains started to come in again.  Packing up our stuff, we set our bear can 100 yards away and made our way back to the camp for the night.

On one of our other weekends, we set out on a glorious hike.  The weather was finally agreeable and sunny.  Departing Toklat River, we hiked through the sun to Polychrome.  On our trip we discovered four moose sheds of gargatuan proportion, one set and two single sheds, all bleached white by the sun and one stained red from iron.  Setting up our camp on the side of Mount Geode, we witnessed a mad caribou running across the plains.  The poor thing had to be attacked by bloat flies. They act crazy as the flies attack their nostrils and eyes.  Its erratic movements had me thinking of someone running from a swarm of bees.  Just as quick as it ran into view, it ran off. 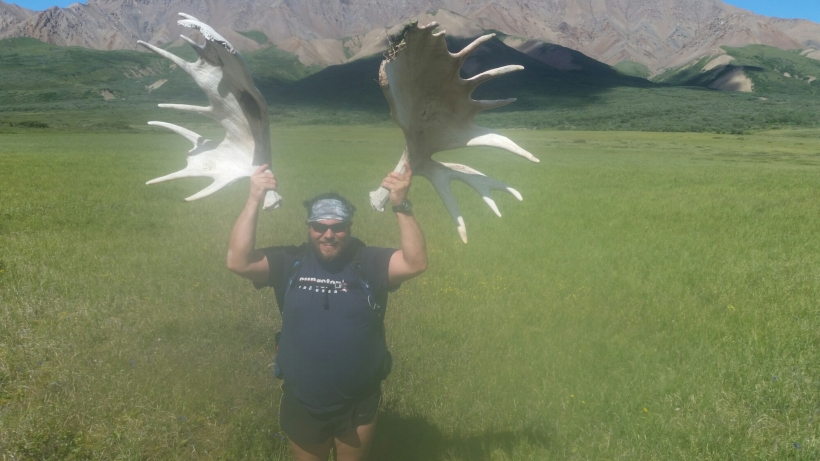 As we stood there waiting for the bus to pick us up, I heard a distinct sound off hoof steps on the gravel road.  Calling Sierra over, we stood and watch in amazement as this lone bull caribou came into view.  I had plenty of time to catch a few pictures as we stood motionless and quiet as he passed, stopping to graze a few feet from us.  He passed within just a few feet before heading down a drainage and into the alders.  Most of the wildlife we saw, was from the bus, for the rest of the season.