My last day in Anchorage was spent wandering the streets.  I had been packed for days and found myself taking more and more walks.  The rain cascaded off the roofs and eves creating tiny rivers in the streets.  The gutters filled with babbling little brooks, floating leaves, and sticks down to the drains and beyond.  Walking for an hour or so, I came across a small restaurant and had lunch.

My meal was spent on the phone with old friends as I killed time till I could go to the airport.  Taxi called and we were soon on our way to the airport.  Finally, I thought, I was out of this God forsaken place and the dreariness.  I was quickly through security and waiting at my gate in no time.  Sierra was having a great time in Hawaii; her pictures not doing it any justice.  I couldn’t believe how much I missed her for such a short time. She had only been gone four days by now and it seemed like an eternity.  It’s funny how no matter how long you’re apart, it’s the one that is left at home who misses the other more.  It’s no surprise since they are usually the less busy of the two.

With that I was on my first flight out of Alaska and on my way to Seattle.  The first flight went by so quickly as I watched movies on the TV and rested.  One three hour layover down and I was on my second flight, which was a totally different story.  Once we were up in elevation, the plane hit a bit of severe turbulance.  Enought for the pilot to deviate his course.  How do I know this?  There is nothing more unnerving than being in a plane when the pilot’s radio transmissions to ground control phase over the speaker system due to electrical interference.  He was completely unaware that we heard his trouble messages and with most of the flight asleep, I was left to control my nerves in silence.

Another three hour layover down in New York, up I went to Boston.  The last of my flights for the day went quickly and before I knew it, the band was back together.  Deja Vu, Zen, and myself were on our way to Katahdin.  We all were quite excited to finish his hike.  This was a long time coming.  Seven hours of driving later we were in Baxter State Park and setting up camp for the night.  Each of us slept soundly despite our excitement.

The next morning I took off early and headed up the well known trail.  I knew Zen would catch me but I wanted to get a good enough head start, so that he’d catch me later rather than sooner.  The clouds were thick and heavy.  As I came out of the trees I was met with a familiar sight, no views.  Climbing alone, my mind wandered to the things that mattered to me and reminded me of my last climb here.  As I reached the exposed rocks, the wind swept past me, trying its mightiest to blow me off the rock face.  15 mph gusts my ass, it was at least 30-40 mph here and it wasn’t even gusting.

I reached for the first rebar hand hold and noticed something large and dark looming over me.  I felt the dark figure in my field of vision and looked up and to my right.  No more than two feet from me was a giant raven, floating just above my eye line.  We locked eyes as he turned his head to match my gaze.  I just stood there, half up this rock face, looking into his dark eyes and he was held motionlesss in the air from the wind.  Just as quickly as I noticed him, he slipped up and glided off and away.  Looking at where he had been for a just a second or two, I continued up.  I was near the table lands when Zen caught my climb.  We hiked for a bit before his adrenaline took over and sent him up alone.

Passing the table lands, and climbing the last little bit of the mountain, I could barely hear the voices in the distance.  Then there it was, close to me again: the sign – new and well painted, right in front of me.  Tears immediately flowed down my face as I struggled to keep it together.  All the emotions from the year before and the year after came flooding at once.  I was so overwhelmed I wept uncontrollably, the tears streaming down my face.  I had thru hiked the Appalachian Trail, carrying my best friend for 2189.6 miles from Georgia to this very hallowed spot.  It had been a year since I had been here.  This was the last spot Roland and I were together.

In the year that had passed, I’d traveled to Colorado, Alaska, found the most wonderful person on the planet and we were now over 5150 miles apart.  Zen and I had been planning this venture since last October and it had been a year in the making.  I was overjoyed to have summited this mountain after the time away.  Turning towards me, Zen asked if I was alright.  Wiping my eyes, I walked over as I gave him a hug and congratulated him on his accomplishment.  With no time to waste, I placed a hand on the sign, took a picture, and said goodbye to Roland for the last time. 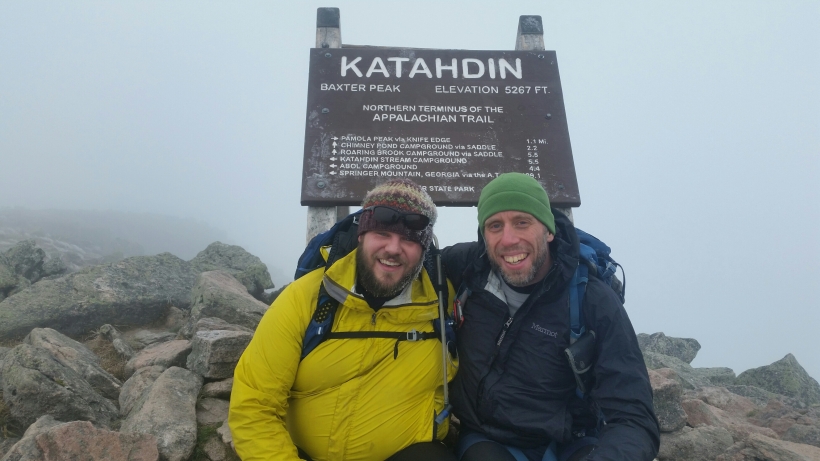 Just like that, we were on our way down together.  Back across the table lands, down to the precarious boulder field of a rock face.  I was anxious, something I was unfamiliar with.  More so than the last time I had been here.  I should know every step of the moutain; I had climbed it in crampons, snow, and ice.  I clung to the rocks as if my life depended on it.  Mastering my hesitations, we finally got back into the trees and talked about how I had done this before.  The truth was I had no idea how we climbed the first time.  Covered in ice and snow, somehow I made it to the top and back.  This time I was somewhat unnerved and left wondering what had changed.  Zen and Deja Vu would later tell me, “Maybe I had something to lose now”.  I most certianly did.

We talked trail and nothing else for the next hour down, and the seven hour car ride back to Boston.  A few bars later and Kevin and I were on a bus ride back to Delaware.  Each day speeding up, I met with friends and family for dinner, lunch and everything in between.  The next four days flew by and I couldn’t believe I was once again boarding a plane.  This time on my way to St. Louis, Missouri to see the one I loved most.

One thought on “The Return to the Mountain”