The night was interesting to say the least. Kevin woke up in the middle of the night and grabbed his sleeping bag and pad, looking like a five year old holding his bedding and was just staring at the ground.  I look at Jess and see her looking at me.  Both of our eyes say to each other “Are you going to get this one, it’s your turn.” I turned to Kevin and asked what he was doing. He looked at me and said “I think there is a snake down there.”  I told him to go back to bed as I sighed in disbelief.  The rest of the night was without incident, thankfully.

When we all awoke we started the most glorious breakfast the trail had seen.  We had coffee, pancakes, grits, homemeade black raspberry jam, peanut butter, oatmeal, and a few other things.  This epic breakfast set the mood for the day.  We started off looking at about 9 miles for the day with the best conditions possible. It was sunny cool and clear all day.  The miles flew under foot as the group hiked out. Kevin teamed up with Mellanie and set a good quick pace.  Those two hike very well together, while the newlyweds, jess, the section hiker, Andrew and I led a steady pace. We traveled along a c shaped mountain ridge, the whole time being blessed with a wonderful view, a long cabin in this wide open valley. 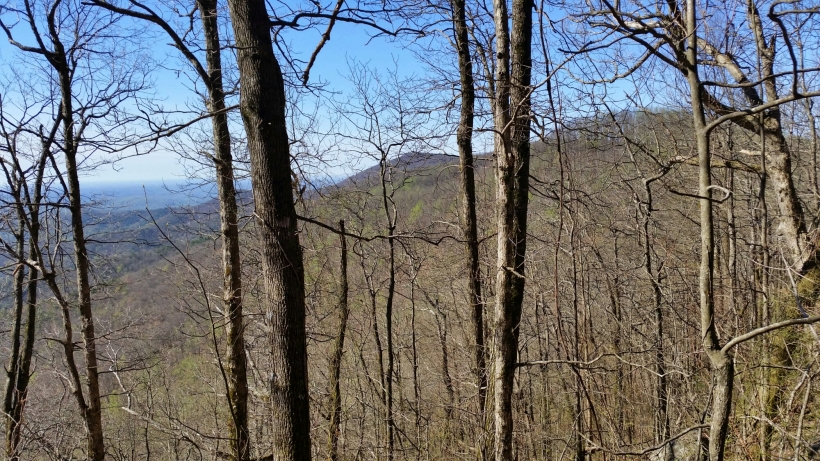 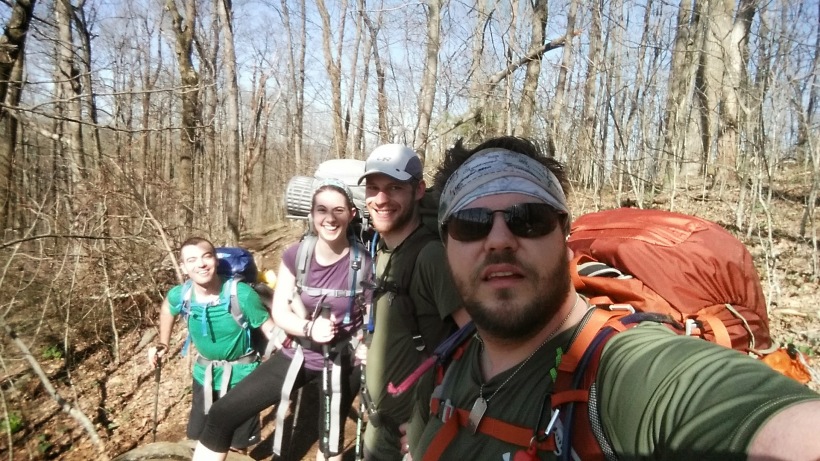 We chatted and joked mile after mile, the trail was about two feet wide with a sheer clip to our right for quite a longtime.  When all of a sudden, I spotted a large black object to the left of me.  Just as I  turned my head to say shit snake, it darted between Jess’s legs.  She shrieked in terror dancing away from the quick moving Black snake.  Everyone jumped bit, this snake was at least between 5 and 6 feet.  You could hear her heart beating out of her chest. That was a quite a scare, she could have gone off the mountain side if she had stepped wrong.

Back in the mood we hiked towards woody gap and recieved some beloved trail magic.  This young, open hearted man named Justin, had brought an array of sweets, pastries, and sodas for the weary thru hiker. This gentleman had section hiked a few weeks ago and wanted to share his expierence with the thru hikers. We spoke  about our group which had adopted the name The Pod. We stayed with him enjoying the weather and views for quite sometime. It began to dawn on us that Kevin and Mellanie hadn’t arrived yet.  Worry set in.

After about a half an hour Kevin poked out of the trail and there was no Mellanie in sight.  Kevin dropped his pack and went back for her.  20 minutes had gone by and I went after him.  Running down the trail, I passed a few of our fellow hikers who updated me where they were at. I trucked down the sheer trail running when there were flat spots. I hoped everything was alright, she said her feet were hurting the other day.  Just as I rounded this sharp corner they appeared walking slowly as she limped away. I picked up her pack and we set off helping her back down the last quarter mile.

Getting her set up with food Sara and I checked out her feet.  Good god, this poor girl’s pinky toes were shot.  The entire end of her pinky toes were blistered so badly that the ends of toes were just one giant blister. They were so swollen that the pressure on her toes was excruciating. The only course of action was to relieve the pressure and number up with ice. Blisters somewhat realieved, the only thing to do was to patch her up so it wouldn’t get worse. Sara and I doctored her up and went slow over the next few miles to our camp at Lance Creek.

The day has been a great day on the trail. Mellanie unfortunately had shoe problems, but luckily we caught it in time.  Our Pod was really coming together.  We are truly a dynamic group and each of our strengths plays well with the others. We setup camp and relaxed after our day and just soaked up each other’s company.