We had heard that if you were an AT hiker you could white water raft for free.  This was the only thought I had waking up on Saturday.  I sat in my tent catching up on blog posts for a while waiting for the gear store to open.  We need to resupply and get a few items for the next few days to Fontana Dam.  I awoke early and headed to the gear store which was supposed to open at 7, what I found was that the hours of the NOC were very loose, they didn’t open when the sign said and they stayed open later as well.  I also found a southbounder or SOBO waiting there to resupply too.  It’s funny how you can just tell the hikers from the other people quickly, I mean we are all wearing essentially the same things. 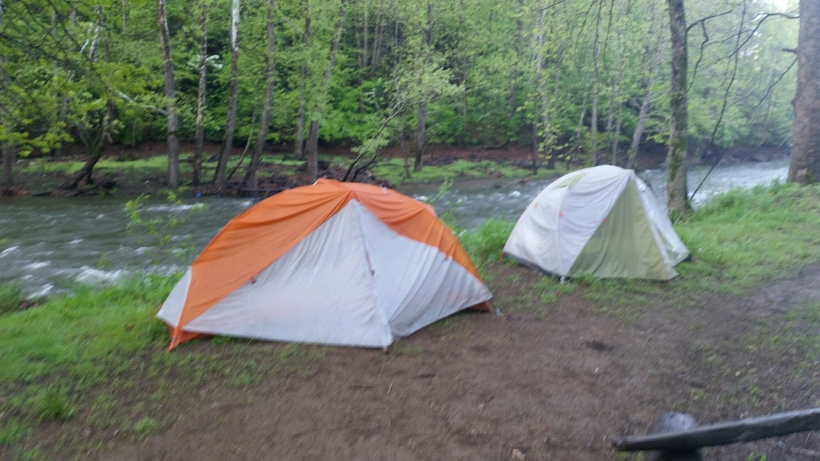 Talking and killing time we waited for the diner to open at 8 am, at least this one was on time. We decided to eat together as we continued to talk all things the AT. It wasn’t long after we ordered our food that Kevin showed up to join us.  From there it was a never ending revolving door for friends who came in one by one to eat, sat with us ate, and left.  For the next two hours we talked and discussed whether or not to zero and enjoy the kayak competitions and the possibility of white water rafting.  When Kevin finally got the right place tracked down we gave them a call, Rolling Thunder.  Calling Rolling Thunder Kevin found out that registered thruhikers could raft for free with there ATC registraion.  We all got excited, especially me, do it Kevin.  He told us that they would shuttle us up and back to the facility in about 20 minutes.  Dude, that is what’s up, Big Brown, myself,  and Kevin hurriedly got ready for our adventure.  T-bird, Gadabout, Pebbles, and Bam-Bam had just gotten their breakfast and were not going to do it. 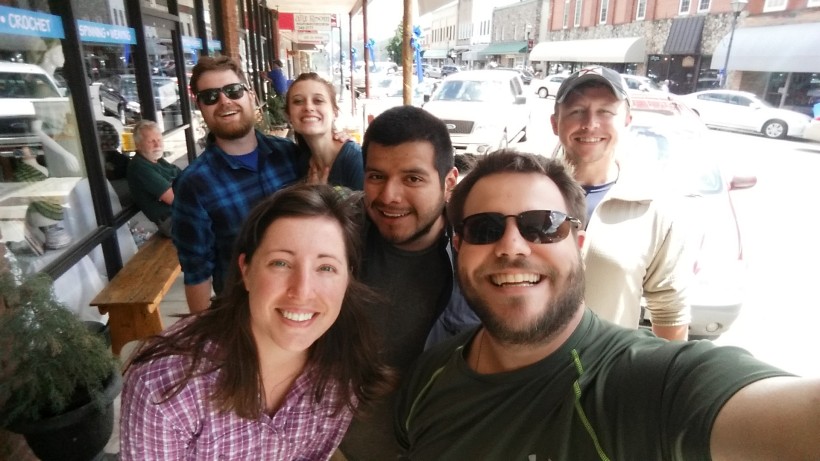 Running back to our camp to change, we were soon picked up by Rolling Thunder by one of thier guides.  For the next 15 minutes as we rode, we heard all about Brad, where he was from, how he got into guiding, everything.  For us it’s always about the story of people, so we continued to ask him questions as he drove us up.  Brad is one cool dude we thought.  Checking in was so easy for us we filled out two forms and they hooked us up with the gear we needed. Taking there advice we opted to have the wetsuits for the trip, they didn’t cost a lot so we weren’t shy about paying for them, we were going rafting for free anyway.  The lovely girl behind the counter finished with our paperwork and sent us out to get fitted with he other guide.

You know I never got his name to be honest, but he was definitely a character to say the least.  He got us all fitted with suits all the while keeping us laughing and smiling.  All ready to go we got on the bus and drove 8 or so miles up river, so we could be set free.  We had chosen unguided since we had some white water expierence before and felt confident we wouldn’t get hurt.  There were just two groups of us, the AT hikers and group of guys from Georgia for the day.  Joking back and forth each group set out on thier own down the river. 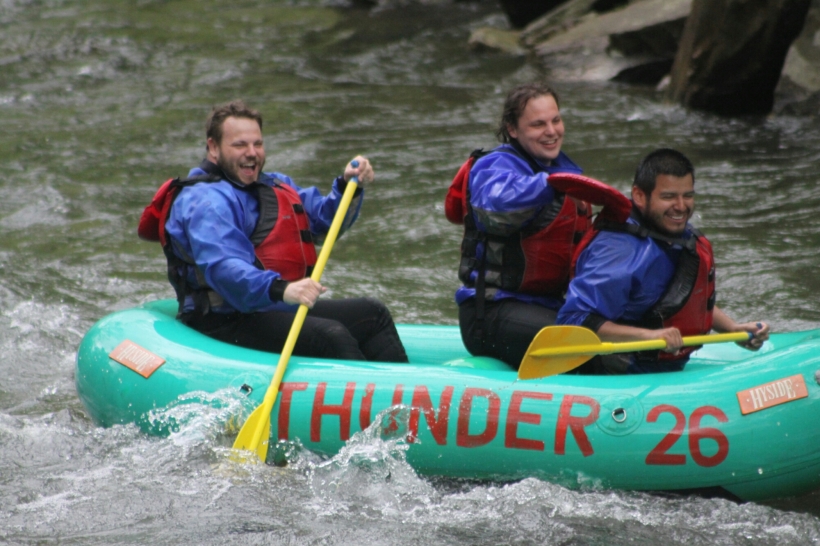 We were informed by the character that our driver was blind and had his cdl license. Awesome, what could go wrong?  For the next twenty minutes or so he gave us instructions, laughter, stories and advice about the river and himself.  We had a. Great time on the ride up but it wasn’t long till the fun began, we hit rapid after rapid, spinning the boat, throwing water at each other carrying on you name it.  The next two hours went by so quick we had so much fun, especially when we hit whirlpool and flipped our boat, dumping Kevin and Big Brown into the water.  Oh my god we couldn’t stop laughing, Kevin was trying to turn himself upright while Big Brown hurriedly clung to a tree.  I’m just sitting in the raft trying to maneuver with one person.  It’s just not happening,  I’ve got no counter weight so my bow is sticking straight out of the water.  Climbing to the middle of the boat I try to get Kevin, twice I come with in inches of him for him not not swim towards the paddle as the raft is pulled down river. 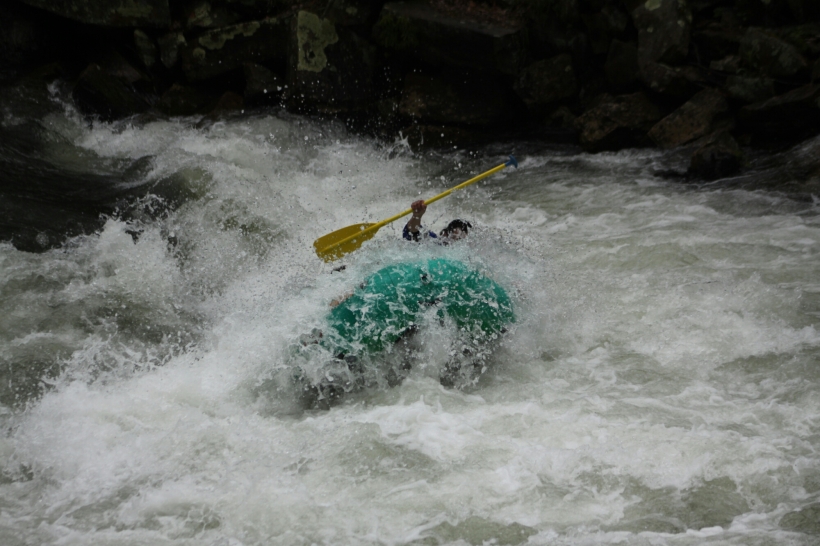 At this point all I can do is head for shore and wait for them, nope I’m leaning looking back and hit a small rock, dumping me out of the raft.  Tossing my paddle in the raft, I swam hard and quick to the raft, gripping it and dragging it to shore.  We were soon aided by and group of kayaker who scooped up thier paddles and the two of them.  God I couldn’t stop laughing, watching the two of them walk down the embankment to me.  We were having too much fun. Everyone back on board we headed down river again, destroying rapids after rapids. Our last rapid was a waterfall and we knew it was going to be good.  Doing what we were told and not goofing off we navigated towards it and nailed it.  It was perfect, going over our boat disappeared in the spray, before emerging in victory.  Paddling to shore, we headed back to top Rolling Thunder’s facility with our blind driver again.

Getting dressed we thanked them and headed out back to the NOC for food and realaxation.  The rest of the day was spent with friends and food.  I had lost a sock that morning unknowingly and as we walked back to the dock there it was just laying there.  Wooot I found it, we’ll actually Kevin and Big Brown saw it first.  We tole everyone about our rafting and just relaxed for the day, eating and goofing off till bed time.  I called home and It made me miss them more, but I knew it will see them soon.  Just and few more miles to go and we would be soon past the Smokey Mountains.

One thought on “Rolling Thunder”