Leaving our little oasis at the NOC was a bit depressing.  Really and truly it was hard to leave for me.  We had a secluded camp right off the river with a fire put and just our group of friends.  Just a quarter mile from the NOC area, we were camped on this little island that was just a few feet off the river. Each night the sounds of the rolling rapids would lull you to sleep, softly bringing you to your own land of dreams.  Our little island paradise was perfect, just far enough away to be on our own, yet close enough we didn’t have to walk forever to get supplies.

We expected it would be a long day for us.  There was to be about 8 miles uphill for the entire day ahead. Fighting the stomach problems we had, we hiked out in the humidity. It was so humid too, sweat was pouring off me as we trudged uphill. I felt so fatigued and lethargic starting out.  Weakness taking over, it felt as if I was walking through water and sludge.  Each step was labored as we trudged up the trail.  I just couldn’t shake the feeling of not having any strength.

Time went by so slowly over the miles for me, with the slow pace we were putting down it was hard to stay focused.  By the time I started to feel better we hit a section of the trail that was littered with rocks.  Hopping back and forth it quickly became apparent that none of the rocks were stable.  I started to think the bigger rocks would be more stable.  Nope not any more stable, nothing was safe and stable.  Each rock was like walking on a stone seesaw, combined with the brief shower, the going was a bit dangerous.

So far the trail, even though was all uphill, it wasn’t too bad.  That was untill we hit the rocky outlook, with its own beautiful view, that we appreciated our hike. Just about 30 feet later we saw another rock with an even more beautiful view and I thought to myself, of course there is always a better view. We appreciated the view for a few minutes taking a break and headed up the steepest part of the trail. Pausing every so often to catch our breath, we climbed up to the one hundredth false summit. Taking our scheduled break we ran into a mother daughter team.  Talking with them we found out that they were trying to beat the record for the fastest mother daughter team of 126 days, by quite a bit though, 99 days. 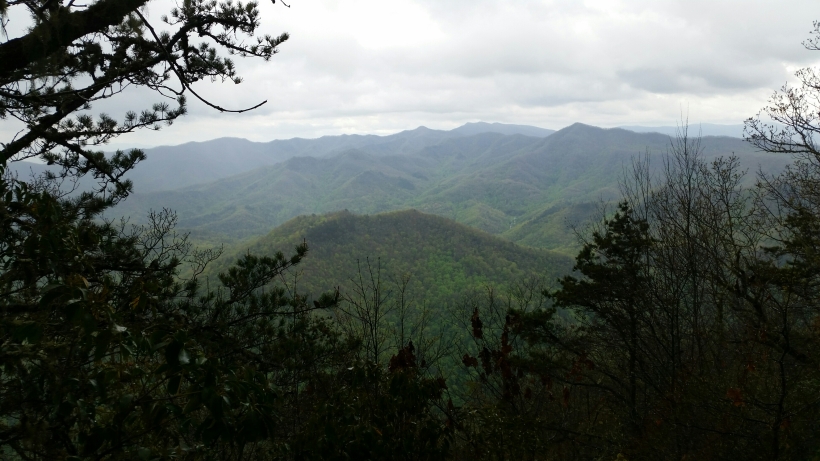 They trekked off with blazing speed a few minutes before we headed out.  The never-ending uphill in the fog was a blessing and a curse.  You couldn’t see far her which kept you from getting discouraged but you couldn’t see how far was left.  We passed a few camps which went by with little notice but the big red Coleman tent with its door open in the rhododendrons we took notice of.  It was out of place, abandoned, and reminiscent of a crime scene. Kind of eerie a bit.   Passing by we finally reached our shelter, warm food was the only thing on my mind.  Setting only up stuff down I cooked up the biggest food items I had and feasted for the evening.