Waking up I was so cold, the temperature must have been very low that morning. Most of everyone that was awake was still in thier sleeping bags putting layers back on.  The shelter was a full house, it seems that everyone had the same idea as us.  They wanted to keep thier tent dry one more night before having to set it up. Crawling out of bed I noticed that most of the shelter was up and there weren’t many that still slept.  We haven’t stayed in any shelters but for us this was odd, people were any was leaving at different times of the day.

Eating our pop tarts and getting dressed we discussed what to do for the day. We were confident that we could do another 16 and head into Fontana Dam with only 6 left to go in following morning.  It didn’t take long for us to pack up our things either.  We had some good news, Gadabout, T-bird, and Dandy all had the same plan too.  We all decided to hike together for the day and enjoy each others company. It’s nice having someone to talk to instead of always Kevin and myself.

They finished thier camp chores as we finished ours and off we went, up the hill.  The first part of the day was to be a bit rough the easier then hard then easy all the way to the shelter.  We screamed up the first steep section to Cheoah Bald, man we missed out ,if it wasn’t so foggy sleeping up there would have been worth it.  It’s funny how the views are almost always of mountains but you never under appreciate what you’ve accomplished. Each hard climb was only preparing us for the next.  Taking our time to snack and enjoy the view we headed out down the mountain side. 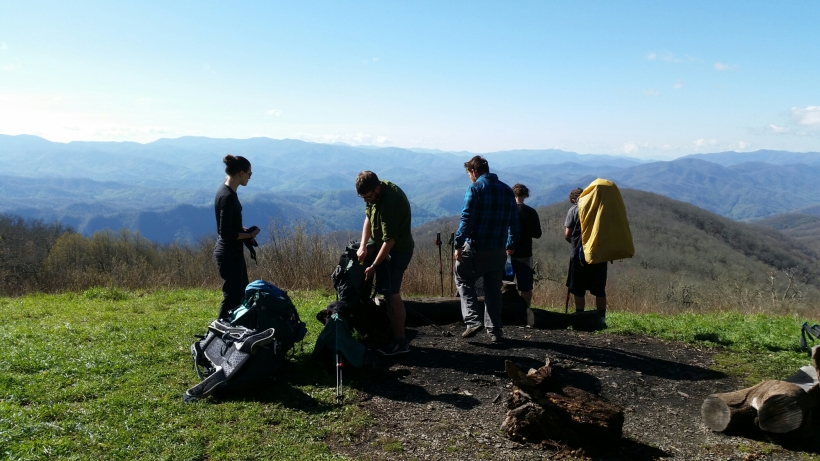 The rest of the day pretty much went like that. We had no views or special things to see so we spent most of the day playing movie games and talking.  It really helped to distract us from the hard miles we had to do.  We were surprised at our brief lunch with apples, cookies and half a sandwich from a local birding group. When you are tired and hungry it’s hard not to fall in love with the people who generously give with no reason other than to share.  That apple really hit the spot too.  Our energy levels refilled we started up the hardest part of the day for us, Jacobs Ladder.

We were very happy to be playing games now, the trail was nearly straight up and it went on for a mile.  One very tough climb, foot after foot we went.  Having to stop every so often to rest, it was whooping us.  About halfway up the four of us were joined by Iccarus, another thru hiker.  He joined in and played our game too, making even more fun.  We definitely needed the distraction going up this climb with no reward.  Finally reaching the top we stopped briefly to say good bye to Iccarus, before continuing on.

Walking and talking we trekked onward. This day seemed like it was never ending, the goal remained forever out of reach. By now the ibuprofen was no longer working and my knee was starting to hurt.  It seems who ever designed the trail in recent years favored placing it always on the left side of a mountain, giving it a permanent leftward slope.  The constant over pronation of my right foot was starting to affect the outside my right knee. Stretching and massaging my IT band helps sometimes but not all the time.

Just and few short miles to go and all downhill, I was dreading that.  The constant fraction and stress from the leftward trail was brutal.  We hiked and hiked, everyone was wanting to get to the shelter now.  What was this, no way, we couldn’t believe our eyes, there was a cooler at the bottom of the trail.  Oh my god trail magic we couldn’t have been more excited, cold drinks, fruit, whatever it was we were going to enjoy this, we reached up opened the cooler and saw our bounty, empty cans and freeze pop rappers.  There was no trail magic for us what a let down. Feeling cheated and sad we hiked over the road and up the. Alst bit of hill.  Then we heard it, a loud scream, WHAT! NOOOOOOOO!, we knew another hiker had found it too.

The smell of fire filled our noses and I knew we were close to the shelter. At each turn in the trail I strained my eyes looking, searching for home.  Then all of a sudden there it was, this tiny log cabin with a fire out front.  We couldn’t have been more excited, tired, relieved to have found it finally.  Setting up our tents, we prepared our dinners before feasting on whatever we had left.  Sleep would come quickly and easy for me that night.