I’ve been waking up around six for the past few days and it’s been quite nice.  No one else is up and if I need to I can get some writing done before the busyness of the day sets in.  It’s quiet, mostly everyone is still asleep, and I usually get on the trail around 7.  Getting up this early has other benefits too, I usually get to where I am going earlier as well.

On this particular morning I had a long uphill to conquer before getting to the shelter. Leaving the road wasn’t hard but it meant going back uphill from the gap to the next one and then going up sugar mountain.  This mountain had no switchbacks, the trail just went straight up the side.  If it weren’t for the few turns in the trail, you would see the top from the bottom, it was that straight going up.  The long climb up wore me out, I had to stop a few times to slow my heart rate on the way up.  Having music on was a blessing, the distraction kept me from focusing on the climb and lack of views.

By the time I reached the first shelter, I was starving, lunch at 10 sounded like a great idea.  Eating some food, drinking some Gatorade, I sat and stretched.  Hiking by myself has been rewarding in that I’ve got all the time in the world to do anything.  Resting and stretching I chatted with the other hikers at the shelter before heading back out.  I climbed a bit more before going downhill to a wonderful view at white rock.  Snapping a picture I headed out and came across the perfect tree.  I could totally scare the guys from behind this, I thought.  Then it hit me, I’ll leave a not for Gadabout on the tree.  I carved two nails out of wood, wrote a message on a leaf for him and left. 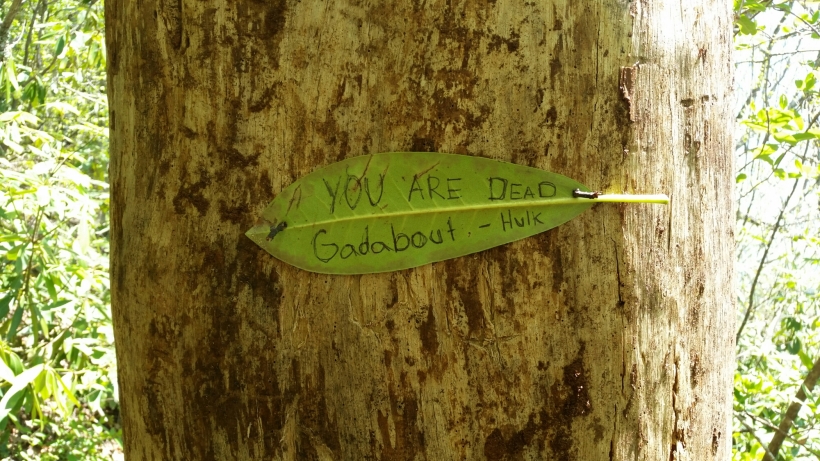 Going down the back of the mountain, I sang a bit and enjoyed the great trail.  The long flat trail made for easy going and fast hiking for me.  The time flew by for me, I covered a good distance before coming to a beautiful water source.  Here I found some sticks and took a bit of time to write out a message to Big Brown too.  It was so refreshing to be at ahead of everyone in the day.  Having all the time in the world during the day felt great, I could do whatever I wanted and still be ahead.

The next section of the trail warned me that the ridge was going to exposed and I should go around in bad weather. What it didn’t say was it was a 2 mile rock scramble over large rocks, boulders, hand over hand climbs, sheer rock, and the first mile was under the canopy. I was so irritated by the time I reached the top that I just wanted to get off the mountain.  Seeing the views, I waited and sat on top, relaxing, killing time, and just resting.  It was strenuous getting up to the top but worth it. 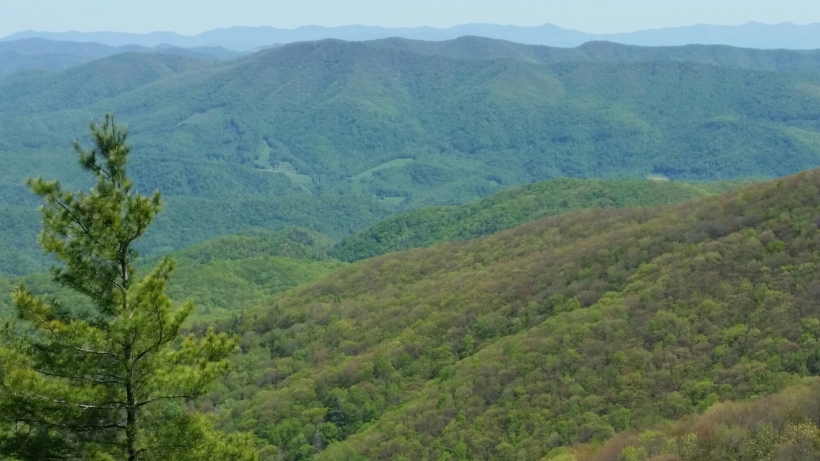 Following the rock scramble back down I was not far from the next shelter.  It was just two or three miles and it was only two in the afternoon. The day had been hard on my feet and I couldn’t wait to get there and sit down.  The two miles of rocks really beat them up too.  I turned off my music and just zoned out.  Down the mountain to the ridgleline, following the small hills I came to the shelter.  Man was I hungry, the long day had worked up quite an appetite and I was going to feast. 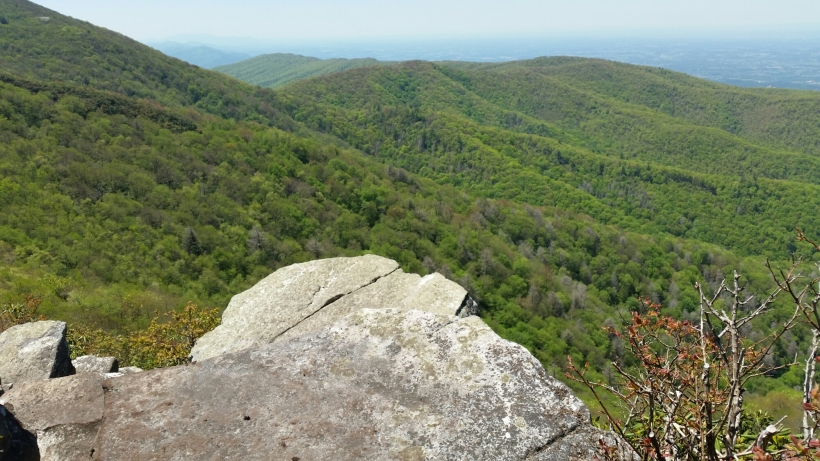 The only problem with leaving so early is that I’m so far ahead I tend to wait for the others. That’s just what I did for a few hours, waiting relaxing, taking in the wonderful weather.  I had recieved word that the others had to back track to the campsite and weren’t going to make it.  Setting up camp sleep came easily for me that night, I had the best spot, a bed of pine needles an inch or two thick and no one around.