We didn’t leave Miss Janet’s till about noon, getting us back to Spivey Gap around 12:45.  I took off in a hurry, I wanted to put as much space between me and everyone, getting some of that solo hiking in, also when I slack pack I like to keep my heart rate up for some cardio.  Shooting up the hill side, I came to a small waterfall, covered in fallen trees.  There was only one solution to get a decent photograph, they had to move a little. Shifting the trees a bit I was able to get a good view from the bridge. Taking a picture I was back off up the hill again. 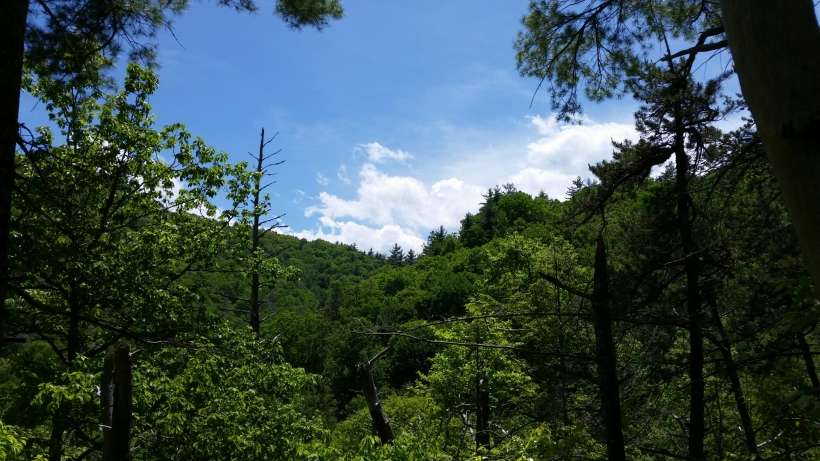 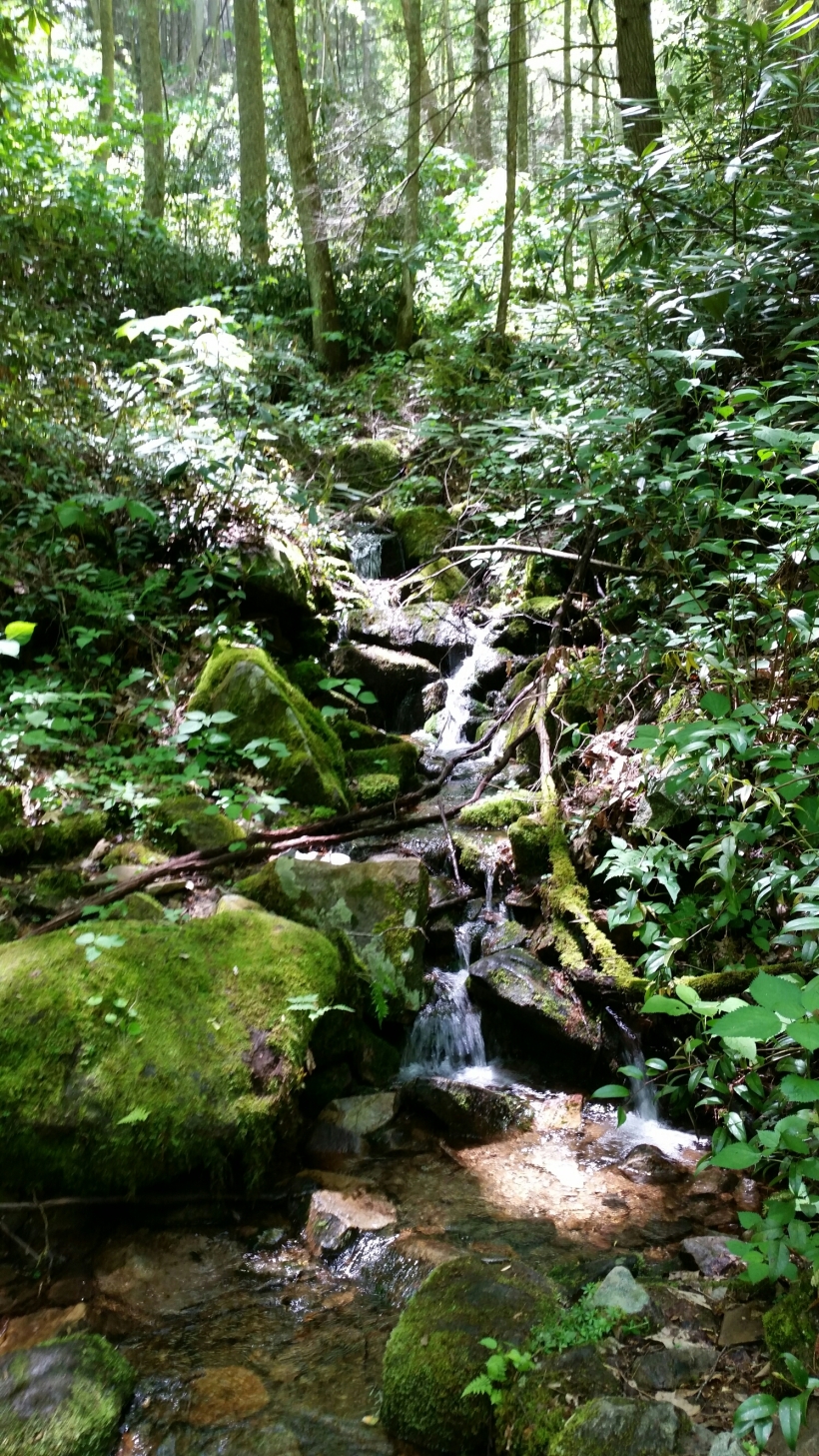 My quick pace got my heart racing, having no weight was a nice change of pace for the day.  I was able to move at a much faster pace than normal, not having my pack meant I could react quicker. Normally Gadabout would catch me rather quickly, but with no pack it took him longer.  We hiked together all the way to the last water source,refilling our bladders.  Since we were the only two who knew this, we decided to wait for the next one and spread the message. Kirby showed up and again I was off like a bullet.  I was moving so fast that the only thing that stopped me was the unmistakable sound of hissing and rattling.

Here in the middle of the trail was a large snake, this big black snake was poised to strike.  His tail fluttering in the leaves, imitating the rattlesnakes in the egion as a defense mechanism, he meant business. Dropping my gear I gave him space to move, reaching for a stick longer than my poles, I guided him off the trail and took a photo of him.  I then waited, watching,calling out for Gadabout to come check him out.  I must have been there for a long time, by the time he arrived I was getting cold from the sweat cooling me. Snapping some photos, the two of us hiked to the shelter.

Gadabout and Kirby stayed longer than I had, just eating and drinking I went on my way again, determine to do this quickly. Finally the solo time I had craved came to me.  I let my mind wander from this to that.  My mind wandered to my friends back home. Did they know what I had done already, had they read my blog.  I wondered if they were proud of me and if in some small way I was with them at home, like they were for me out here. John and Dawn I have thought about quite a bit.  I hoped they were proud of me and understood why couldn’t tell them everything before leaving.  Sometimes it’s hard to explain how you’ve come to decision without the story behind it.  When the story is so long, how do you tell a loved one how you’ve come to do what you’re going to do.

Again I was reminded of a quote; “The power of that truth, beacuse some of us are on a journey and you won’t be able to stay here. You will be called to faraway places, maybe even foreign lands. – Eddie Stubbs.”  The truth is that I am not meant for the nine to five and something calls and pulls me to this other life.  Where it is going I do not know, but I am going willingly. How do explain this intangible notion, this guttural feeling to someone who has made a great life for themselves that way.  Does this mean my choice is any less noble or good?  My thoughts delved deeper into my own reflection. Thinking and wondering who others thought of or felt what I was doing.  There are only a few thousand people who have ever accomplished a thruhike, let alone triple crowned.

I had come over 350 miles at this point and I was proud of that.  I still had a long way to go, Aaron was right though.  Hiking was the easy part for me, coming this far has been a breeze mentally.  The only real 0hys8cal challenges I’ve had have been my IT band and a few bumps and bruises as my body adjusts.  My brother on the other hand has been all mental.  I was a mountain climber by now and that in itself was it’s own accomplishment.  We’re my friends proud of me, my parents did they even consider what I was doing?

My thoughts drifted away from me to other worldly places, just in time for my Spotify to come on.  Music blaring I hiked furiously again down the trail.  Coming to the last view on the way down. Meeting River Weasel high above the NOC, I took a break and chatted with him.  He had hiked in 06 and shared some good info with me.  No wonder he came back to see this section, the view was amazing.  The last mile after him went quick with my radio blaring all the way to Uncle Johnny’s.  Slack packing had been a great decision for the day.