The plan was to slack pack 20 miles from iron mountain back to Uncle Johnny’s.  The only problem was that we were leaving late and that meant we had to hustle to make it back to town. We didn’t set out till noon and went off quick. I hit the trail hard, moving at a brisk pace the ground flew underneath my feet. The first few miles were not suppose to be hard and as it turns out for once they weren’t. Every time someone says oh its going to bean easy day, it won’t rain today, the trail will be great today, the trail morphs itself into some rocky rainy rooty steep uneven mess, it never fails. So for the few times it’s not a pile of junk it’s blissful and you can make great time.

I didn’t really think much for the first hour or two to the shelter, I was more concerned with setting some distance between myself and the others. I am not the fastest hiker, but I like to thank I am steady.  As long as I can get out early I can set a decent pace, it’s almost impossible for me to catch people unless I start earlier in the day.  So leaving at noon had me at a disadvantage for the day.  Kevin passed me at the first and only view for the first half of the trip. I was taking a photo when he zoomed around the corner. 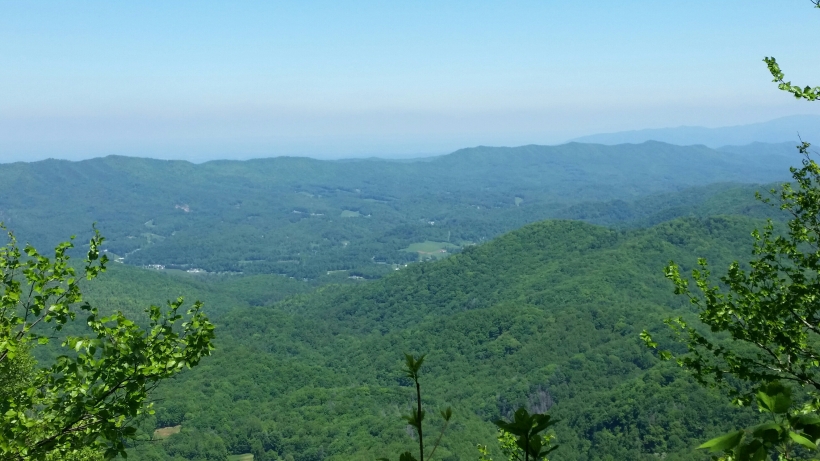 The next mile brought me to the shelter and I needed to change my boots.  I had brought the new boots and the old ones to switch out as I broke them in.  They were killing my feet already and needed to be swapped. When I put my old boots on, I couldn’t imagine how different they felt, the new ones were stiff, rigid, and unfitted.  The old ones on the other hand, due to the intense amount of rain and heat had actually molded to my feet and fit like a custom glove.  It is truly a shame that they had lost there waterproofing and tread.

I had a deadline to be at beauty spot by 5 and I was well ahead of it.  The slight up hills gave way to the mountain, this behemoth of a mountain on the north side wasn’t steep, but very long.  Every so often you would hit a few steps and increase elevation quickly. The long uphill brought every hiker my way, friends who had headed out of town hit me head on as I hiked back to town.  The best surprise was seeing Marty and his wife on the last bit of uphill.  They had a hard time in the smokeys and a hard time coming out of Hot Springs.  The last time I saw them Kevin and quit and they weren’t sure they were going to continue either. We sat and chatted breifly, smiling and excited to see each other.  We caught up regarding there ventures added whether or not my brother was back.

I wasn’t sure if he was back or not, he has been hiking with us the past day or so but we haven’t talked either.  Everyone else was glad to see him though, I liked that his friends were pulling him to come back.  Hopefully what ever he did in his time off and what ever conversations had with them have payed off, renewing his drive to continue. I’d hate to do this alone, but I will if I need to. In not hiking with him I’ve had time to think and refocus myself.  Hiking with Roland was always easy because there was no conversation needed, no forced dialogue or expectation to talk.  My brother on the other hand is so infuriating to hike with for me.  We couldn’t be more opposite sides of the same coin, causing more friction than you could imagine.

I had reached the top of the mountain and what a sight, the entire flat top was covered in furs.  The evergreen forrest floor soft and spongy under my feet felt world’s better than the rocks. It looked like a maze of trees with the trail disappearing between the trees. If you moved left or right a foot the entire forest would change showing or hiding you new things. A perfect example of that showed up in one of my photographs.  I had taken few photos, clean and free of objects and when I moved to the left a foot I saw that directly in front of me was a camp of three tents.  The trees had aligned to hide them from view creating the illusion that you were alone and in aligned secluded forrest.

Heading down I burned hard to get to Beauty Spot, the other side of the mountain was rocky and had numerous steep switchbacks. My pace had to be careful and deliberate, to quick and I could slip, to slow and I’d miss my mark.  Heading down the mountain, the terrain and forrest changed a few times, showing the altitude changes. Coming up the last incline I was met by Kevin and Herbie at a clearing. This beautiful field had enough trees to cast shade in just the right manner, framing the field in a picture-perfect way.  We sat there as I ate and chatted about the others, discussing when they would arrive at our location. Herbie trekked on to Beauty Spot to wait and I followed shortly. 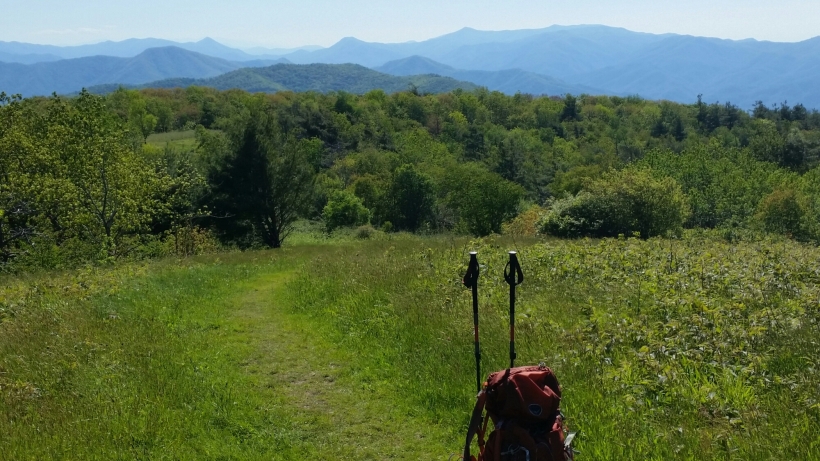 Taking in the wonderful panoramic views of Beauty Spot I felt recharged, rejuvenated. The next 11 miles would hopefully be as pleasant as the past 9 or so.  Herbie and I snapped a few photos and headed downhill, the grass made for easy walking. Coming down from beauty spot the views disappeared and blended into shrubs and trees again. It looked like that was all we were going to see for the day.  Some days are like that you get one maybe two things to look at and that’s it.  Lucky for me it wasn’t the case. Just as the grass had given way to shrubs the shrubs soon were alive with flowers in full bloom. For a mile or so stretch we were blessed with the smell of flowers and wonderful colors. 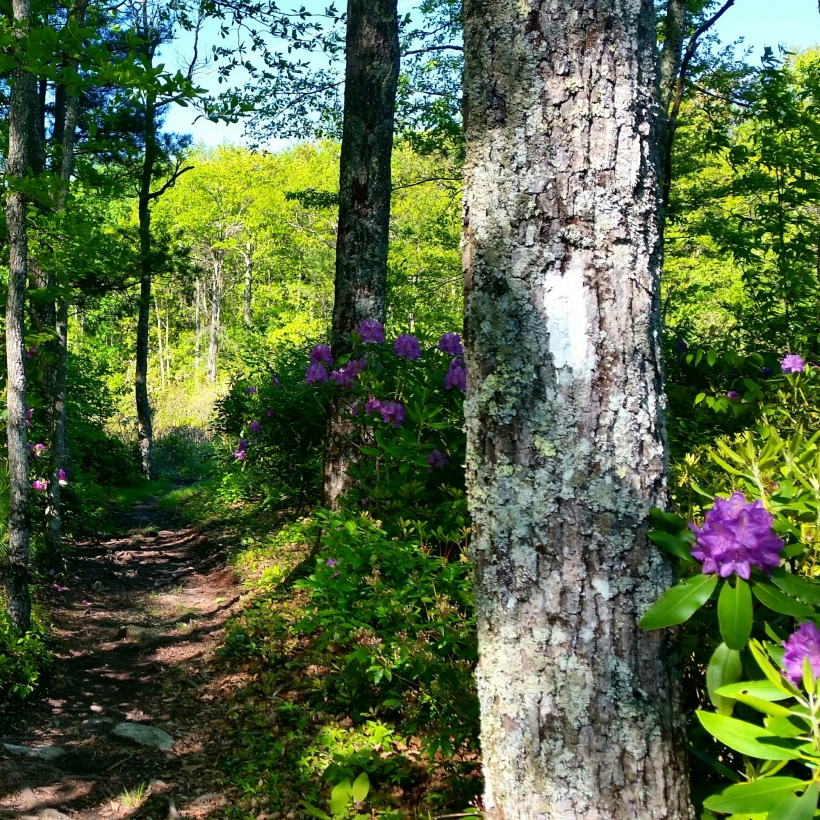 At Indian Grave Gap we parted ways and I continued on.  I find that when I am alone I get lost in thought or lost on the trail.  My pace quickened and I hit high gear.  Down down the mountainside I went, switching back and forth.  No one to talk too, no one to see, just me and the trail.  This went on for quite some time before I was blessed with my final view for the evening.  I had just come around the corner and the entire trail was alive with small white flowers.  The aroma was splendid, filling my lungs with that sweet air for a change.  Taking in the moment, I thought of how far I had to go and what time it was.  It was a race now, the light left was waning, my phone’s battery was nearly dead.  Which would go first, my legs, the music, or the light, I pushed hard to get down the last bit of the mountain. It was my phone first, then the light, and finally my legs as I came into Uncle Johnny’s again. 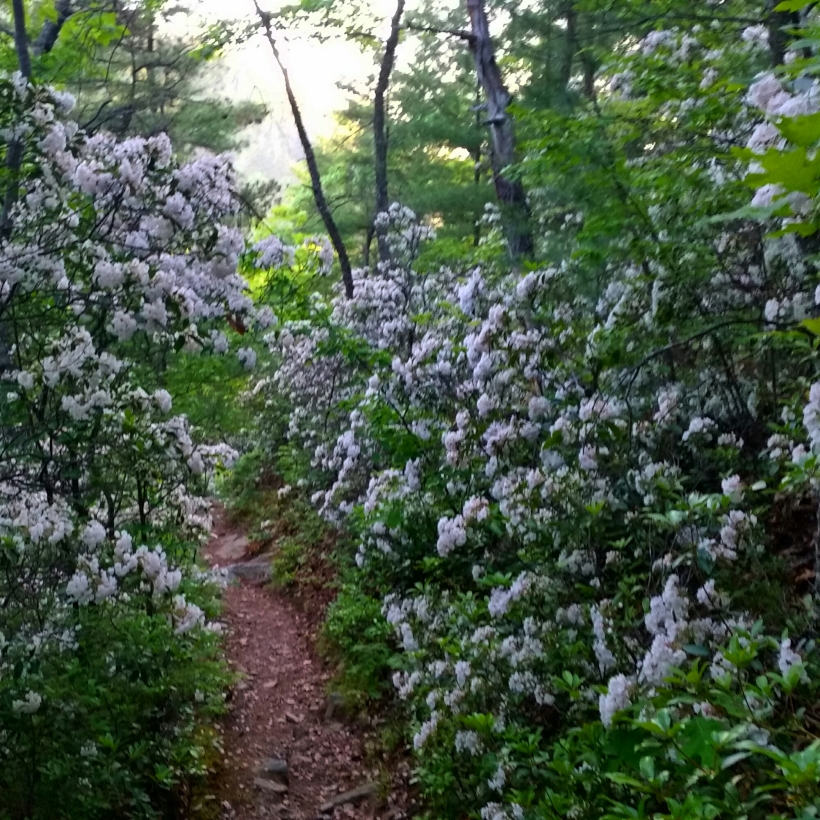