Just a few hours of sleep under my belt I packed up quietly saying goodbye to Just Jeremy and headed to the next shelter. To my surprise I found two of my friends ahead Socrates and Shadow Monk. They had camped at this beautiful site between two creeks, the water drowning out any and all sounds that could keep you awake. The slow rolling water cascaded over the rocks around them, truly a picture perfect place to rest for the night. Having no energy I opted to wait for them to break camp and headed out with them. That was the best part, they were in no hurry to hike either, no pressure to perform.

The three of us talked over the next few miles to the shelter. Catching up on each others lives and talking of friends we had passed. The smooth trail gave a false sense of what Pennsylvania was, we all knew this wouldn’t last and the rocks would begin later, for now we baked in the smooth terrain. Reaching the shelter I recieved a text from Lauren and she had gotten a car for the day. Looking at my two friends I bid them well as I stayed there.  I had hiked this section before and chose not to do it again. Seeing Lauren again would be a much better expience than the same sights.

Just a half an hour later Lauren and her dad arrived, food in hand. They are such good friends I thought. Excited we caught up and thought of how to get Zen for the day too. She and heard he was crossing a gap I had done in the middle of the night and we set out to wait for him there. Over the next few hours we waited, talked about her quitting and refocusing. I relayed the story of Small Fly to her and listened. She was tired of hiking everyday, tired of carrying the burden of her brothers memory on this journey. She had set out to step were he had gone and accomplished that in Hot Springs. She wasn’t hiking her hike anymore, she was hiking his hike. This was depressing her and causing feelings of despair and regret.

We talked about her doing it her way and if she didn’t want to hike everyday, she could section what she wanted. Stay in a bed, drive to gaps and see her friends, she didn’t have to actually hike every mile. She could do a highlight tour and see it her way. This idea resonated with her, she had hiked over a thousand miles for her bother and carried his legacy far enough. By now Zen was close by and we waited quietly. Just then he popped out of the trees shocked for the rain. Looking tired and beaten she got out and hugged him, his smile growing some.  I was waiting in the back of the car and he couldn’t see me. Popping out his smile grew more. He was excited to see all of us and we offered him Gatorade and donuts. 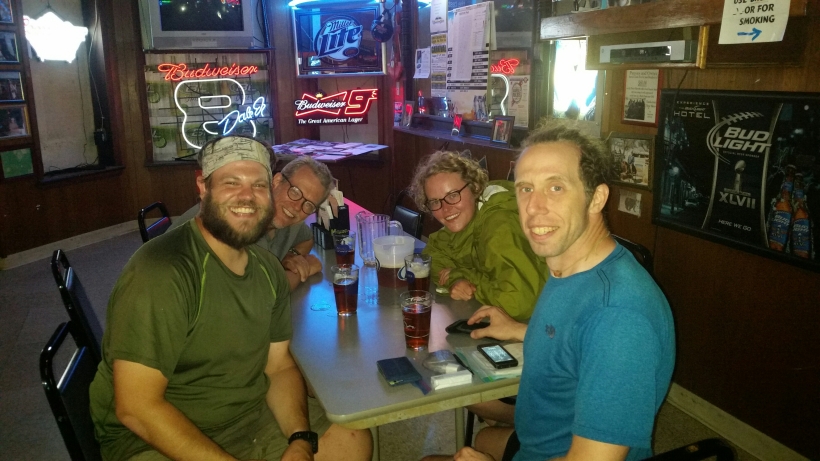 Better yet we went out for beers at a local bar. Zen was down, beaten, broken.  It turns out that he didn’t get he job he had hoped for, expressing on its own it got worse. Around the same time this had happened his longtime girlfriend broke up with him. She was unable to be supportive while going back to med school. Understandable in its own right, yet still very hard to swallow. He had been hit by a huge combo.  The look of sadness was easily seen on his face in the quiet moments between conversations. Sharing pints and stories we laughed and cried together, the band getting back together for a moment. This was probably the best way to spend my free afternoon before Kim would arrive. She was meeting me at Caledonia and I was excited to see her.