The four of us met again at the wayside, Zen, Teddy, Deja Vu and I all headed out with full bellies and hopes of big miles. Zen and I would walk out first, talking all morning. I felt bad, sad about what had happened. That couldn’t have come at a worse time for him. The feeling of everything on top of the world and then in just a few days it all comes tumbling down around you. It was apparent he was lost and beaten up a little.

We talked about why he was out here and for hi  heard mixed feelings. He had gotten rid of his apartment and put most of his faith in returning to her.  Now he was truly free as one of his friends put it. Like me he was unbound, free to wander and roam. Free of all the social and societal ties, for me is a blessing, for him was the most terrifying expierence in his life. We are two opposites, where I have flirted and floated the line of freedom, he has done everything to remain stable. Stability for him was freedom, there were no worries when everything was planned out and calm.

Yet through all of that he hated his job, hated the nine to five. He always felt drained droning away at work.  His introverted personality required so much downtime at work that he felt exhausted by mid day. The strain of his job had clearly grown and affected his daily life.  This journey was to release that weight and now it had been sidetracked by these two speed bumps. Really and truly I was afraid he was going to get off the trail. I had stayed behind because Lauren and asked me to, now I knew I had to at least stay with him for Pennsylvania.  I would stay to keep him in the game, he would find a new reason to be out here. 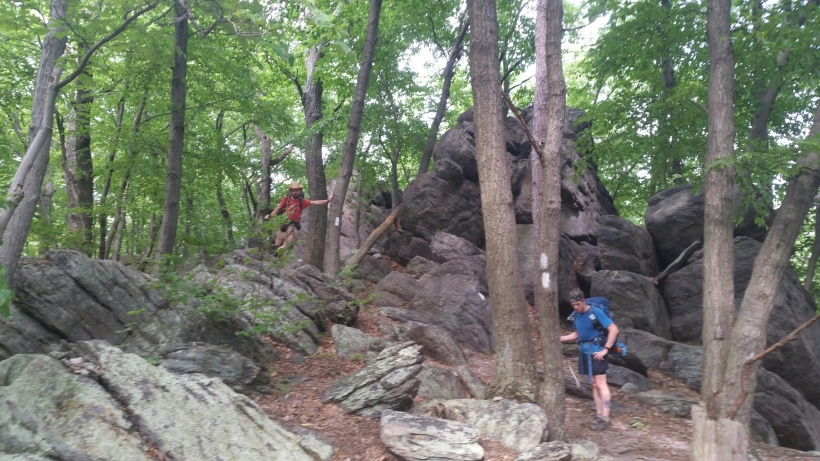 By mid afternoo we caught Deja Vu and headed up the harder part of the terrain for the day. Having done the roller coaster back in VA, we all agreed that this was it’s illegitimate offspring.  The steep short up and downs kept our bodies working over the miles, hating every inch of it we were excited to finally be down on the ground again. We knew town wasn’t far ahead and pushed hard to get there for the evening.  Through corn fields we trekked Deja Vu and I, passing ahead of Zen. He had used the bathroom and was getting some alone time in.  We didn’t even notice that the trail turned in the middle of the field as the two of us headed deaper into the corn. So deep we soon found ourselves on the other side looking at a set of rail road tracks. 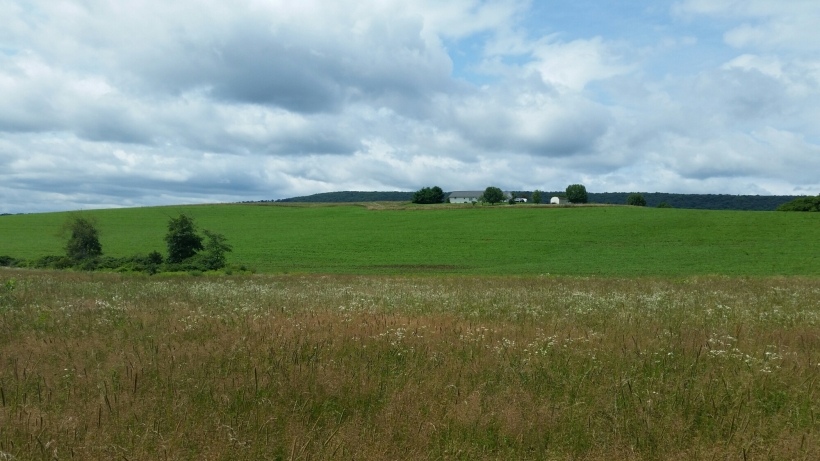 Crap we had gone off trail I thought, no worries, we can just wing it.  Taking a left we headed down the tracks to what to hoped would be a road. God I am good, I thought when we saw the crossing and the white blazes.  Even when I get lost I know the way, or maybe it was a bit of luck, or a bit of Google maps to validate my thoughts, but you’ll never know. Down the short road we crossed into the boiling springs park by the ATC. If this town was like hot springs we were in for a treat, Hot Springs was hot Boiling Springs must be on fire with things to do.

How the hell? Zen was sitting at the ATC waiting for us and Teddy wasn’t short behind us either. We must have gone good distance off trail then for them to catch us. We were caught by surprise by what happened next, the only bar in town to get food at was closed Sunday and Monday and no one was answering at the Allenberry Resort, the only lodging in town. While we got snacks at the gas station Teddy walked to the Allenberry and tried to get us a room. Upon his return we learned the entire facility was open, every room, every door, there were just no people to be found. Finding this odd we hitched up and tried to get a room for the evening. Since none of us could find anyone and there was no place to stay we made our way to the Lodge for hikers.

We thought our best option instead of sleeping in the beds and paying in the morning, which we have done before without a problem was to hang out in the common room and stealth it there neatly till the early am and then pay for a room. We had asked the empolyees inthe roomif they minded us staying here and no one objected, permission in hand we set up.  Our neat little beds and clean approach were no matter for fate. As it would happen at about 1 am a random employee of the tower side of the resort came in screaming at us. His incessant yelling and two dogs barking would echoe through the room.  He was yelling that he had just talked to us an hour ago and that we were told to leave. 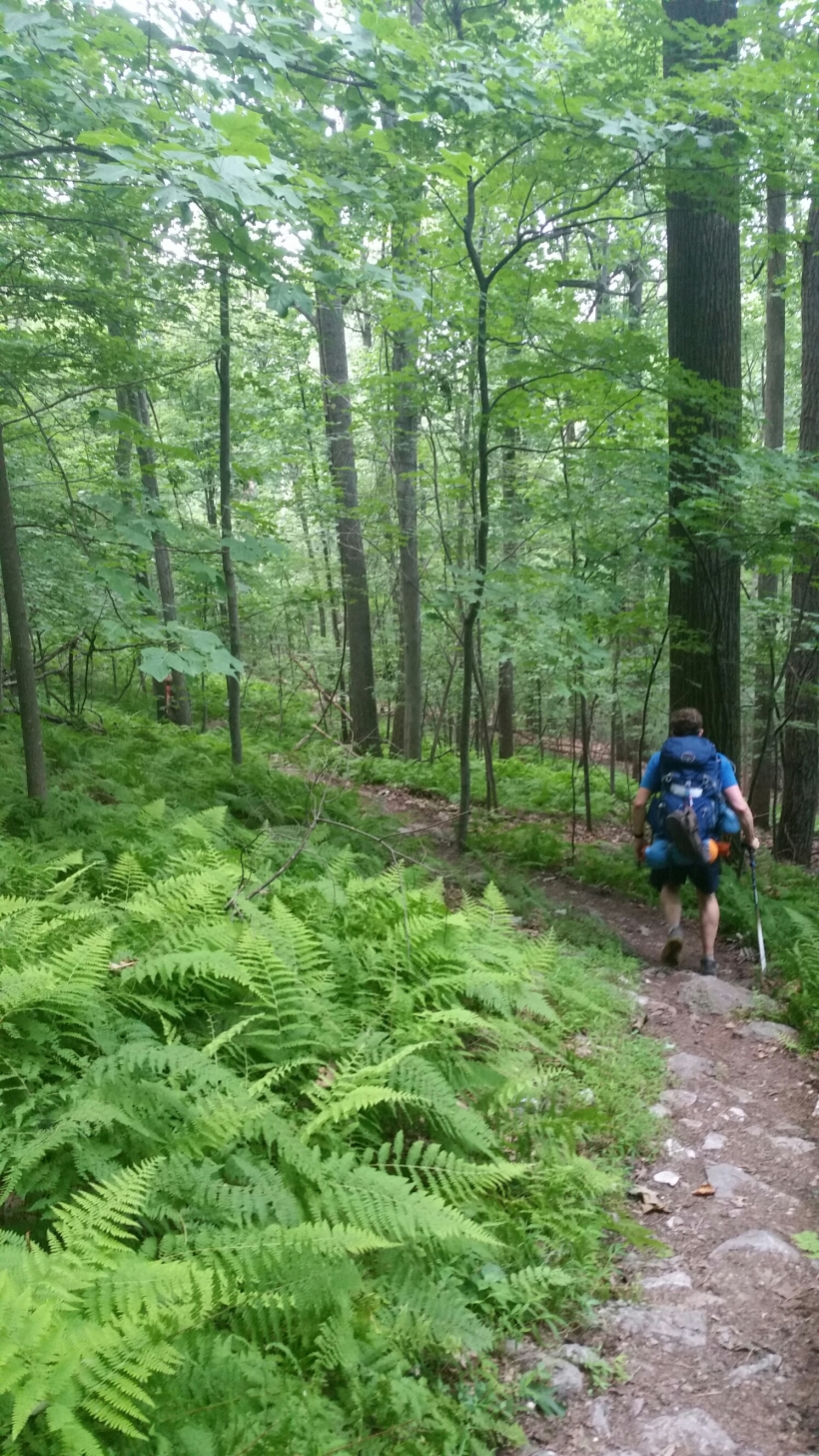 It qi key became apparent he had talked to someone else and they had been asked to leave. More than likely since we all and long hair and beards we probably looked alike to him. There was no talking to him, even when we handed him money for our stay he continued to lose his temper. Packing up in the middle of the night we hiked back into town, it would be 2 am by the time we got to the outskirts of town. Tired and irritated the four of us got no sleep next to the train tracks.  The train rolling by every hour gave us no reprieve for the night, we were beat. The next day we walked like zombies for eight miles into Carlisle PA. Exhausted and hot we took refuge in the days in to weather out the fast approaching storm that would engulf us in the evening. 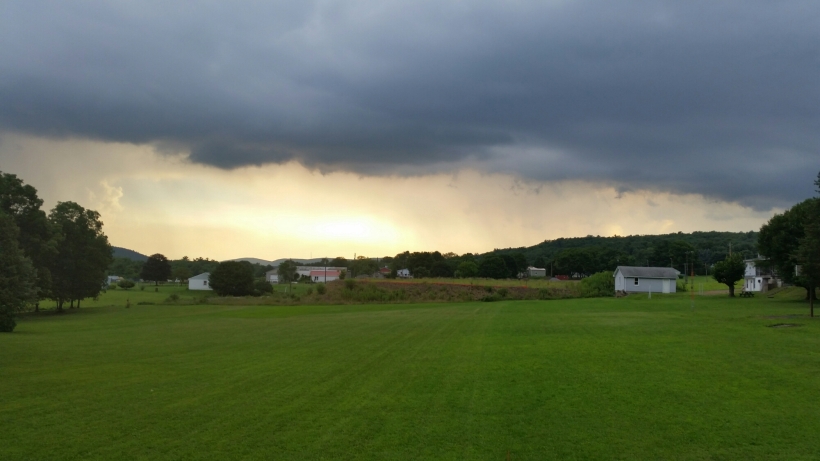