Rain and been in the forecast and we planned on hiking out early, that was till we got up at 5 and saw it was pouring out. The cold rain had a way of wanting you to stay in and rest, we did just that. Not leaving till late morning the three of us pushed for a big day. We wanted to go 20 plus for the day and make up for the rain. My leg was still hurting and it was clear my IT band was shot at this point. The outer pain in my knee and tightness in my thigh clued me in. Each downward step was agony as we hiked that morning to the next shelter.

In reaching the the next shelter we rested and dried out what was wet from the trail and sweat. Hanging a clothes line we all made a real lunch instead of the grab and go sort we normally did.  One by one the rest of the clan joined us, Zen, Deja Vu, Twiggs and the others. It wasn’t long before our lunch break became a grand event. While others ate and Earthling used my phone we played ninja out in the clear area. The afternoon unplanned and sunny had an aire of a sweet summer memory before it and even finished. 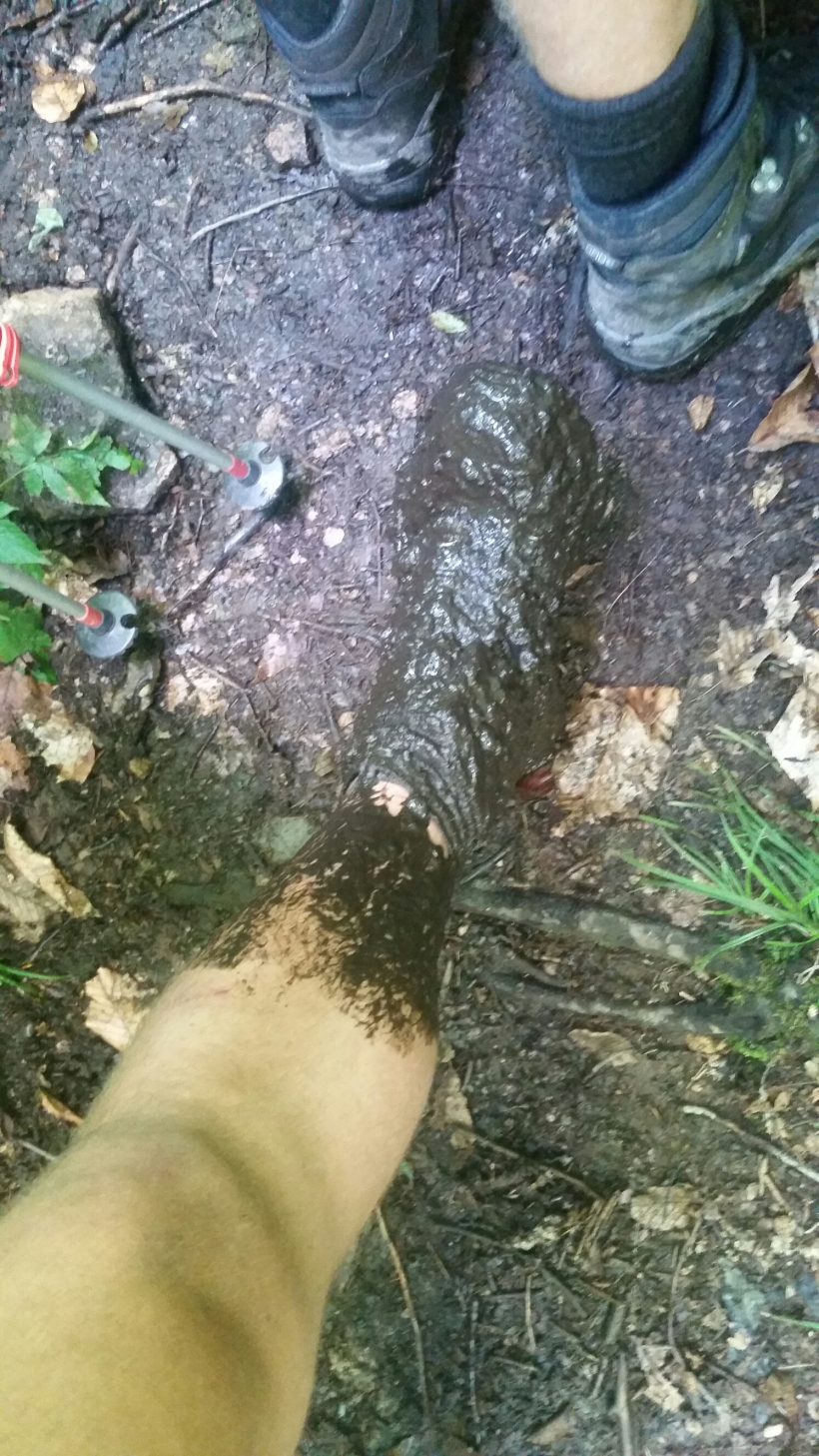 Leaving the two of us, the boys walked down the muddy path. In one instant I was dry then the next Boosh my foot goes two feet deep into and mud puddle. I was muddy and wet again, so much for dry socks and a good day I thought. I just couldn’t win, I was unable to open my food at lunch, my heels were raw for some reeason, and now I was soaking wet again. The day was turning our to go to crap for me fairly quickly. From there I spent the rest of the day slipping and sliding along the trail.

I was soon an passed by Earthling and the others as I had a long climb down the ridgeline. The muddy terrain stress my support muscles and joints as I slid here and there.  Soon the sliding gave way to falling as I slipped of ft his root and that rock along the trail. Going down over and over I was increasingly becoming more and more irritated. The worst of it was yet to come, I had to drop about a thousand feet in just under a mile which was super steep.

Taking as much care as I could afford to go down the mountain I teased down the rocks. Still I fell again and again, the tread on my shoes, the moisture of the rocks, lack of steadiness in my muscles all played a role in my ace meeting the ground over and over. As I traversed the unkempt rock steps, each one out of place. Some already sliding down the mountain, some teetering on the edge, others sloped nearly as steep as the eground they were placed upon ,all precariously ready to send you off the trail at a moments notice. In just an instant a fraction of a second I was secure in my footing, in the next I was sliding down the mountainside grasping at vegetation and saplings to keep from going off the edge.

I had had enough, I was done for the day emotionally and mentally. Mother nature was trying to kill me and she was getting too close to comfort for me. I wanted to go to town but I wouldn’t unless the others did as well. I am what I am, stubborn and headstrong sometimes, unless I absolutely had to I would push on whether I wanted to or not. Climbing down the last bit, nerves shaken, filthy from head to toe, I spied Deja Vu getting into a car while the others waited in the parking lot for me to come down. I was spent and they knew it.  Taking me under their wing, they coerced me into going into town. They were right and I knew it, I hate admitting defeat or that I am not OK.  For the remainder of the evening I seemed in town and took it easy for the night.