Leaving our secret paradise, we all had feelings of not leaving and wanting to return. Alicia gave us a ride to a trail head that would lead us back to the  AT. The overgrown trail gave some hesitations to the group whether or not it would lead back to the white blazes, but I felt confident about her directions. Showing his uncertainty Flailing bet us a dinner that we would not make it back to the trail head, I took his bet in an instant and started to count my dinner. He was certain he would win, even more so when we came to a split in the trail. Splitting up earthing and I headed in different directions to see who h way the trail went.   In her direction it disappeared into the thick foliage where as mine continued. 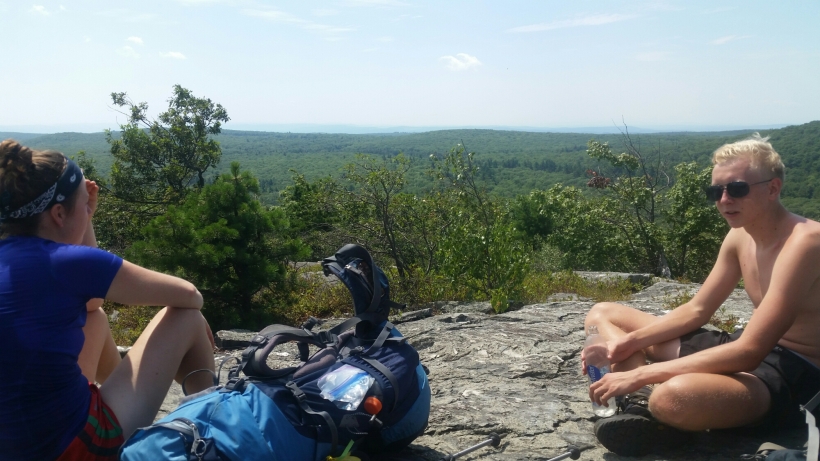 We walked for more than a mile and just like she had said we popped out onto the trail for the AT. Flailing shouldn’t have made the bet we laughed, he forgot I also had GPS on my phone, we’d find the trail either way. Here we left Puck to meet up with a friend and the three of us continued on down the AT. We wanted to hit the Massachusetts by the end of the day so we pushed hard in the late day. The heat was up and the air was humid, sweat poured off all of us. It wasn’t long before we had our shirts draped on the backs of our packs.

The heat beat me down quickly, it has become very quickly apparent that the heat is my enemy and the cold is not. I was becoming dehydrated and tired, no amount of rest and water could cool me on our short breaks up the mountainside. The beautiful open views let us take one last look at Connecticut before crossing the state line on the way down the first mountain. Taking lunch we enjoyed the cool air by the stream and relaxed. The three of us would laugh a lot, making jokes, telling stories, we do that at pretty much all the points in the day. We had just one more mountain to climb before we would split up for the day.

Pushing hard to the top of the very steep climb, we traversed a sheer open rock face for hundreds of feet before climbing to the top of Everett Mountain. We found the fire tower had been removed some time ago so there would be no views for us. Only Flailing on top of the rocks could see what was around and he just saw storms. Calling Bob, the three of us made our way down the mountain to the parking lot. To our wonders out surprise we found two huge water coolers with dozens of water jugs strapped to them.

Saying goodbye , I caught a ride down to the bottom parking lot and met a gentleman named Stefano. We stuck up a conversation and I soon learned how special this mountain was to him. He had met his wife here on the mountain. She was a thru hiker, like myself at the time, and when he decided to propose to her he and done it here as well. This whole place had a rich history for him and it was a pleasure to hear about it. His friends all lived in the area most down the road.  His cute Cocker Spaniel laid inthe back of his car while we chatted. Before long I wondered where Bob was at and Stefano offered to take me to an area with cell service. 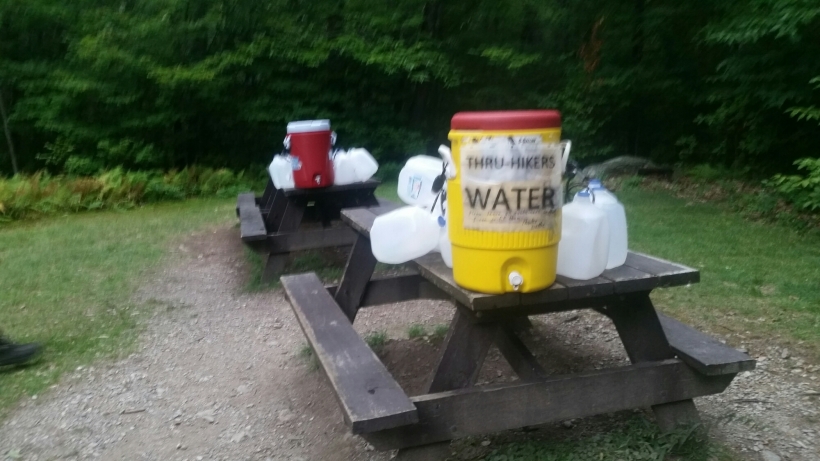 Receiving a text, I found out he was not close to the area and Stefano was quick to help. Off we wen the two of us to meet Bob so I could get a shower and some food. Seeing Bob there, waiting by his car was great. I was in Massachusetts and here was my long time friend welcoming me to the north. Hopping in, we went to pick up dinner and get settled for the night. Over dinner the three of us, Bob, his wife and I, talked about home and the trail. They were excited to see me and I was excited to see them. I had been gone for months and there was no change for us. It was nice to see our friendship unaltered by our big events in our respective lives.