Our first day on the trail was a hard day.  On the shuttle over everyone was excited and talking to each other. One of the other hikers asked if I had a trail name already.  I told her that Kim had come up with Bahru and how it came to be, she then said oh I was going to call you inspiration, because of the morale and cheer I brought to the group.  I thought it over as we drove to the top of the mountain. I didn’t get 40 or so yards before I decided to go with it, for some reason it took a hold like supeglue, everyone was calling me that.

It was about a mile to the top of springer mountain which we crushed out with ease.  Photos were taken and journals were written in, the view was stunning as we took in how surreal this expierence was already.  Dutchy, myself and Kevin hiked on and parted ways with some of the other friends we had made already.  I hate to say it, but Kim was right. It wasn’t long before our trio became 5, then 7, then 10. We found excitement and stories with everyone joining us. We were definitely the group to be with. 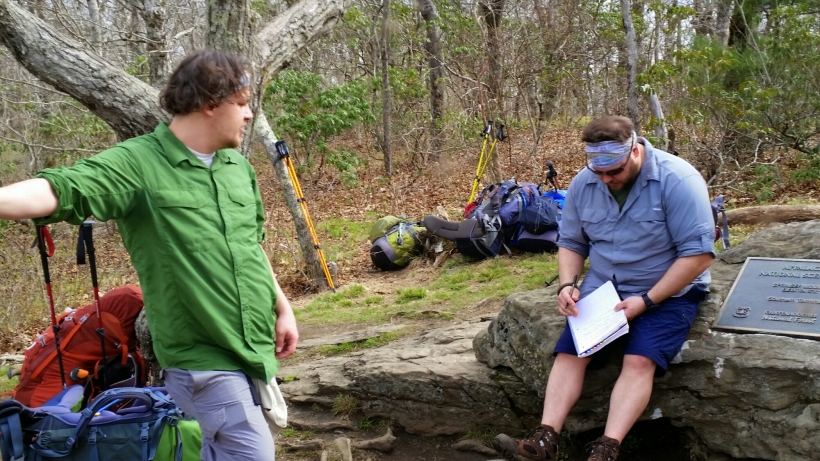 The first few miles blew by as we talked and carried on. It wasn’t till we got to this mile up hill section that we started to separate and slowly become beat down. I had to take off all my excess clothes in order to stay cool.  It wasn’t just me that that felt this unseasonably high heat, incline and lack of fuel.  Our bodies were working overtime today. I was beat I could do no more full speed for today, or so I thought.  At the top of this grueling hill I came across two hikers I had seen before. The girl did not look so good, she looked horrible in truth.

I asked her a few questions and it became very apparent she was suffering from heat exhaustion.  She couldn’t stay here so she would have to hike out.  I divided up some of her heavy items and the four of us went off, kevin, myself and the two of them.  It was not going to work this way.  She was way to hot and tired to carry anything.  There was only one solution to this, she couldn’t carry a pack at all.  I let them know she was done and explained what was going on. Her companion and I strapped her pack to mine and we moved slowly.

Stopping every few hundred yards we made the last mile and a half to the shelter. My body was toast but we made it Kevin had gone ahead to warn everyone we were coming. Seeing him was nice after that brutal mile with two packs on my back.  The three of us needed water and food fast.  It topped over 80 degrees today with almost 100% humidity. Kevin seeing I was toast took care of me, he brought me water, cooked me food as I called home to check in.  I have never been more happy to see a shack in the woods than today.  Dinner sitting in my belly, I checked on my patient.  She still isn’t doing good.  The only problem is she’s ten miles to safety in any direction now.

Tomorrow when I wake up I’ll check in on her again.  She has been able to keep water down but no solids.  I feel so bad for her, I know how bad she must be feeling and what her mind might be telling her.  I just hope that those two don’t get discouraged and quit.  We have all sacrificed for this opportunity a blend I hope we all make it.  I know not everyone will but I do know I’ll have to be forced off the trail.  I would love to see all the friends I’ve made so far again.